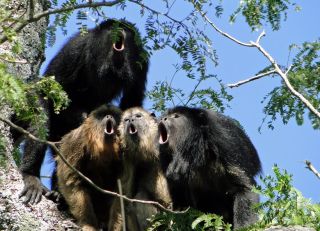 Hooting howler monkeys of the species Alouatta caraya make a racket. Howler monkey calls are as deep as those of much larger animals like tigers — a talent enabled by their enlarged hyoid bones.
(Image: © Mariana Raño)

It's tough out there in the wild, especially for male howler monkeys. A new study suggests that these primates have to make a (evolutionary) choice: deep calls or small balls?

The relative sizes of the hyoid bones and testes appear to be related to how the animal lives and reproduces, according to a new study, published today (Oct. 22) in the journal Current Biology. Howler monkey males that live in groups with more than one male invest in larger testes, whereas those that live only with females invest in a booming, attractive voice.  [See Mug-Shot Photos of Howler and Other Monkeys]

Curiosity about the howler monkey's booming calls dates back to at least Charles Darwin, who suggested that the males' cries are used to attract females, which choose mates based on the depth and resonance of these calls. (Females make calls, too, so howler monkey cries are not exclusive to mating rituals.) [Video: See a Howler Monkey Hoot]

Key to these calls is the hyoid bone, a structure that looks like a horseshoe in humans but is larger and more cuplike in howler monkeys. The bone creates a sort of resonance chamber that makes howler monkey hoots and hollers really ring out.

University of Utah anthropologist Leslie Knapp and her colleagues found that, in howler monkeys, male hyoid bones are up to five times larger than female hyoids, suggesting that Darwin was right in proposing a reproductive role for the monkeys' calls. Next, the researchers measured the size of hyoid bones across 10 species of these monkeys, which live in Mexico and Central America.

Without exception, howler monkey species with larger testes had smaller hyoids and vice versa. And the anatomical differences showed no relation to environmental factors like food availability. Instead, they were linked to the monkeys' social structure.

It's likely that the harem-heading howler monkeys use their deep calls to attract more females, or perhaps to scare off males that might steal their mates, Knapp said. As a result, they can get away with a lower sperm load — they compete for females before the actual mating act.

For male monkeys living with other males, though, the competition comes after copulation. A greater volume of sperm may give these monkeys a fertilization advantage in a female monkey that has mated with multiple males.

It's probably impossible for howler monkeys to evolve both a large hyoid and large testes, Knapp said.

"If they could, they would," she said. "I think, because they don't, it suggests that you can have one or the other, but you can't have both."

To really nail down the notion that monkeys make this reproductive trade-off, the researchers will have to look within species to see if large hyoids or large testes confer real advantages for males.

"We kind of have answered a question that Charles Darwin pondered in the 1800s, so that is exciting for us," Knapp said. "It also opens the doors to more questions, like what is going on within species? Is there evidence that males with the very largest hyoids are the ones having the most kids?"