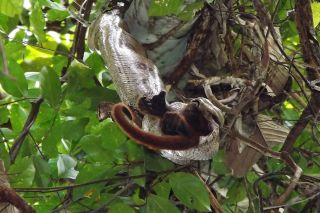 If a snake eats a monkey in the forest and no one sees it, does it make a difference? New evidence suggests that it does.

For the first time, scientists have witnessed a boa constrictor attacking and eating a howler monkey. The finding, and boa-eating-monkey video, is noteworthy since reports of primates being eaten by predators are relatively rare, according to the study, published this month in the journal Primates.

"This may cause us to rethink how vulnerable [these] primates are to predation," said Paul Garber, a primatologist at the University of Illinois, who wasn't involved in the study.

Predation does happen to primates and monkeys, particularly by snakes, large raptors and big cats — but it has not been witnessed very often, Garber told LiveScience. That's due in part to the fact that primates live in groups, wherein each member looks out for threats, providing "coordinated predator detection," he said. Primates also generally have good vision that enables them to spot would-be attackers. It's also possible that the presence of scientists watching primates helps drive predators away, he added. [Gallery: Monkey Mug Shots]

But sometimes the group's defenses are not enough. In this incident, which occurred in the western Brazilian Amazon, an adult female Purús red howler monkey (Alouatta puruensis) was seen climbing away from its group of five other monkeys, trailed by another adult female in the rain forest canopy. Without warning, a hidden boa struck at the monkey, wrapping the primate in the muscular coils of its body and crushing it.

The attack was typical of boa constrictors, which crouch and wait for prey. The snakes have been known to lurk in one place without moving for more than a month, according to the study. Typically boas eat smaller prey, such as rodents and small birds. Most adult female howler monkeys weigh about 13 pounds (6 kilograms), according to the International Union for Conservation of Nature.

In this case, the howler likely didn't see the snake, said study lead author Júlio César Bicca-Marques, a researcher at Pontifical Catholic University of Rio Grande do Sul. The study suggests that "snakes may play a stronger role as predators of New World monkeys than previously thought," he told LiveScience. [Video of Boa Eating Monkey]

After the snake struck, the victim's companion approached the snake and hit it a handful of times. But the snake showed no reaction, and the other monkey soon withdrew, watching the macabre affair. Seventy-six minutes later, after strangling the monkey to death, the snake ate the howler headfirst.

"According to observations on predation attempts on howler monkeys made by other researchers, howlers often don't do anything to defend the victim," Bicca-Marques said.

It's possible that the monkey might not have been eaten if it had stayed closer to the group. "Being a solitary monkey is definitely not a good thing," Garber said.

Other recent studies have found heretofore-unknown examples of primate predation. A study earlier this year, for example, found evidence of a leopard eating a chimpanzee.

The present study was conducted by Bicca-Marques and his student Erika Patricia Quintino. One of the photographs of a boa eating a howler monkey adorned the cover of the American Journal of Primatology, of which Garber is the executive editor.