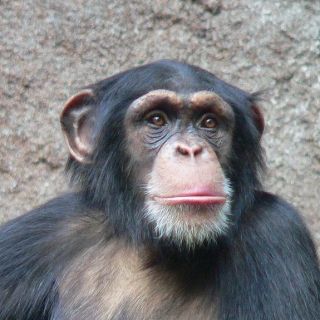 For the first time, scientists have found evidence of a leopard eating a chimpanzee.
(Image: © By Thomas Lersch [GFDL], via Wikimedia Commons)

Only rarely have people seen what happens when chimpanzees and leopards come into close quarters in the wilds of Africa. On these occasions, chimpanzees have made loud, fearful calls, or played the aggressor: In one case, chimps even surrounded a leopard den and killed a cub.

But the big-brained primates don't always win: For the first time, scientists have found evidence of a leopard eating a chimpanzee.

The researchers can't be entirely certain that the leopard hunted down the chimp, because the cats occasionally eat dead animals; in other words, it's possible the chimp keeled over and then became leopard chow. However, the finding has led scientists to re-examine three mysterious wounds incurred by three different chimps in Mahale over the last few years. The wounds were deeper than thought to be possible from fights with other chimps, which is what scientists previously thought had happened.

A 2009 study suggested that chimpanzees face only negligible pressure from predators. If it's indeed true that the leopard ate a live chimp, scientists may need to rethink this view and further examine how predation from leopards, or other animals, might have driven the chimpanzee's evolution, the researchers said. One study from 1993 found evidence of lions eating four chimpanzees, also in Mahale Mountains National Park. The park is one of the few places with ongoing research where the range of leopards and chimpanzees overlap, which helps explain why this was witnessed there.

The new research was published online May 21 in the Journal of Human Evolution.