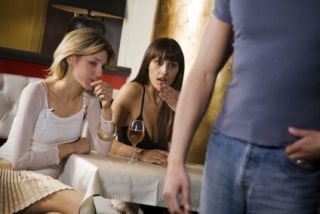 Although it's women are attracted to men with low-pitched voices, the evolutionary reason isn't clear. A new study indicates low-voiced men do not have higher quality semen.
(Image: © stockxpert)

A low-pitched voice in a man is associated with a litany of masculine traits: dominance, strength, greater physical size, more attractiveness to women, and so on. But new research strikes one trait off that list: virility.

An Australian study looked at male voice pitch, women's perceptions of it, and semen quality. Their first finding was no surprise: Women like deep voices and consider them masculine.

But contrary to expectations, they also found that these men aren't better off in the semen department. In fact, by one measure of sperm quality — sperm concentration in ejaculate — men with the attractive voices appeared to have a disadvantage.

This is a surprise because females, both humans and of other species, are believed to glean information about male virility through secondary sexual traits, such as facial hair and muscle mass in humans and other traits in other animals, such as colorful plumage in birds.

In the case of voice pitch, the researchers from the University of Western Australia suggest there may be a trade-off at work. In other words, traits associated with dominance and attractiveness, such as physical strength or a deep voice, may come at the cost of reduced sperm quality, they write in a study published Dec. 22 in the journal PLoS ONE.

For instance, higher testosterone levels are associated with a deeper voice, more masculine features, more dominant behavior and success in obtaining sexual partners. Although testosterone plays an important role in the formation of sperm, however, high levels of it can actually impair sperm production, they write.

To conduct the research, the team recruited 54 men to provide voice recordings and semen samples. Their recordings were analyzed by software and ranked by 30 female volunteers on attractiveness or masculinity.