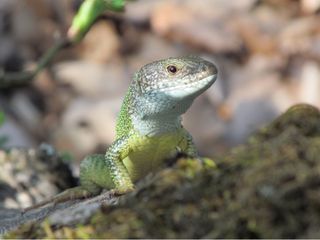 The sex of the green lizard (Lacerta viridis) is determined by Z and W sex chromosomes, whereas many other reptiles rely on XY sex determination.
(Image: © Andras Liker)

Like an awkward junior-high birthday party, some animal species tend to have many more males than females or vice versa, and scientists have long wondered why. Now, they've figured out a key culprit: sex chromosomes.

The proportion of adult males to adult females in a species, known as its adult sex ratio, can vary widely in nature. For example, scientists have known that among tetrapods — that is, four-limbed animals such as mammals, birds, reptiles and amphibians — birds possess male-skewed adult sex ratios, and mammals are usually female-skewed. Extreme ratios are seen in some marsupial species, in which the males die after the mating season, sometimes leaving populations made up entirely of pregnant females. [Animal Sex: 7 Tales of Naughty Acts in the Wild]

For instance, studies of Makushi communities in southern Guyana, where the adult sex ratios can vary due to migration, have found that when men are in the minority, they prefer flings over long-term relationships.

Future research might focus on fish. "They have several different kinds of sex determination systems," Szekely said. "Hopefully, other researchers will take up this challenge."

Szekely; study co-senior author András Liker of the University of Pannonia in Veszprém, Hungary; and their colleaguesdetailed their findings in the Oct. 8 issue of the journal Nature.