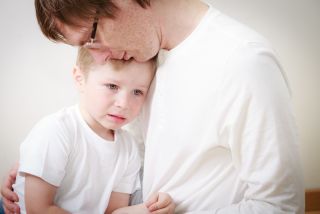 After the mass shooting at a community college in Oregon, which left 10 dead and seven wounded, adults aren't the only ones who are struggling to make sense of it all.

Kids may be grappling with the thought of such extreme violence as well.

Hearing about violent events in the news can evoke feelings of sadness, grief, helplessness and anger in little ones, according to the National Center for Child Traumatic Stress (NCCTS) at the University of California at Los Angeles.

A parent's first instinct may be to shield kids from such horrific news, but that can make the event seem too horrible to speak about, experts say. Instead, parents have to walk a fine line — being honest without being gory, accepting the natural emotions that come while simultaneously reassuring kids that caregivers will do everything to protect them, said Dr. Matthew Lorber, the acting director of the Child & Adolescent Psychiatry Department at Lenox Hill Hospital in New York City.

Parents should "clarify fact from fiction and dispel rumors and myths, but validate their fear that it's OK to be scared," Lorber said. [10 Scientific Tips for Raising Happy Kids]

Think of the developmental age

"That's the time when you can still have blissful ignorance," Lorber told Live Science.

Saying something like "a mean person did something bad and it makes mommy sad" is sufficient for this group, he said.

Once children enter school, however, they will hear the news from classmates, he said.

With these younger elementary schoolchildren, parents should try to be the first to talk with their kids about the event, before they hear gory embellishments from other children, Lorber said.

Before parents start talking about a mass shooting, they should ask their kids questions to figure out what they have gleaned from news media, social media and their friends, keeping an ear open for any potential misconceptions, said Melissa Brymer, the director of the Terrorism & Disaster Program at the NCCTS. If they have picked up misconceptions, it is key to correct them, she said.

Parents should also ask kids what their biggest fears are, Brymer said. That way, parents can address those fears before they enter the youngster's imaginative mind.

Speaking about the event as soon as possible can prevent a child from forming their first impressions from a sensationalized or gruesomely detailed account, Lorber said.

To reassure them, correct any of these misconceptions. For youngsters, this clarification may mean telling them that a school shooting may be scary but that they don't ever have to worry about this bad person coming back to hurt them, he said.

Parents should also steer clear of bedtime when discussing the events. [How to Help Kids Cope With Traumatic Events]

"It can increase anxieties and might make it more difficult to fall asleep if there are any lingering questions your kid has," Brymer told Live Science.

Youngsters also often have fears that their parents won't know what is happening in the event of a violent attack, so relaying the information that schools have systems, such as text messaging, in place to keep mommy and daddy informed can relieve their fears, she added.

Once kids reach middle-school or high-school ages, parents can talk about the subject in greater complexity. Emphasizing the rarity of an event can reassure some kids, but anxious ones may still worry about the worst-case scenario, Lorber said.

For these older kids, it's helpful to focus on the steps they can take to be safe, he said.

That may mean describing all the safety measures in place, such as check-in and check-out procedures at their particular school, Brymer said.

For older adolescents, it's also important to keep tabs on social media, to see whether anger, confusion or misinformation is circulating on Twitter or Facebook, Brymer said.

Despite how scary the event may sound, parents should be honest. It's also OK for parents to show emotions and admit that they are scared or sad, Brymer said.

Parents may need to carve out time to process the event with other adults, without worrying about their younger ones fretting, she said.

"Sometimes it's OK not to be a parent for a second and take care of yourself," Brymer said.