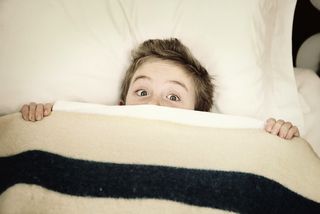 Children who suffer from frequent night terrors and nightmares are more likely to experience hallucinations and delusions later on in life, new research suggests.

Children in the study who had more frequent night terrors and nightmares between ages 2 and 9, as reported by their moms, were more likely to report psychotic symptoms, such as hallucinations and hearing voices, at age 12, according to the researchers.

The researchers also found that children who were still having frequent night terrors or nightmares at age 12 were about three times more likely to also exhibit psychotic symptoms than kids who didn't experience these nighttime episodes. Overall, about 5.7 percent of children experienced psychotic symptoms at age 12, though many did not go on to be diagnosed with a full psychotic disorder such as schizophrenia in adulthood.

The findings, published Friday (Feb. 28) in the journal Sleep, are intriguing because they are the first to link the nighttime frights with future mental health disturbances. In the past, researchers studying kids' nightmares have used retrospective reports rather than following the kids over time, the researchers said.

Children typically experience nightmares during the dream-filled, rapid-eye-movement (REM) stage of sleep, during the early hours of the morning. Night terrors, on the other hand, in which a child will seem to wake up, scream and sit upright in a panicked state, typically occur during non-REM sleep, early in the night, said study co-author Dieter Wolke, a developmental psychology researcher at the University of Warwick in England.

The night terror "often starts with a piercing sound and the children 'fight like monsters,' but they have no recollection that they had it the next morning," Wolke told Live Science. [Top 10 Spooky Sleep Disorders]

Researchers have long known that people who suffer from schizophrenia tend to report night terrors and frequent, terrifying nightmares. But those studies didn't unpack which came first, so it wasn't clear whether the mental illness caused the nighttime troubles, or if some underlying cause was responsible for both.

Wolke and his colleagues looked at data from 6,796 children in England who were tracked from their mother's pregnancies to the present day, as part of the Avon Longitudinal Study of Parents and Children.

Sleep disturbances are incredibly common in children, the researchers noted. In the study, about 37 percent of children had nightmares at some point, and the vast majority did not experience any psychotic symptoms later on, Wolke said.

But if a child has several other risk factors associated with psychosis, "this could be one of the indicators in there," he said.

The study researchers aren't sure why nighttime frights are linked with delusions and hallucinations.

One possibility is that traumas, such as being bullied or abused, cause the night terrors and nightmares as well as the psychosis symptoms later on in life.

"The underlying mechanism is that they're both expressions that the organism is very distressed by experiences," Wolke said.

The researchers noted that the children may have suffered from hallucinations or delusions before age 12, when they were examined for such symptoms in the study; if that were the case, the nightmares may be just another manifestation of the underlying mental illness. But there's no way to know, because at younger ages, children believe in imaginary beings such as Santa Claus, "or go out and dress up as Superman and go with their mum to the supermarket," Wolke said.

During a psychiatric interview, those behaviors would read as delusions, even though they are a normal part of a child's development, Wolke said.

Parents of children who have frequent night disturbances might try improving their sleep by limiting screen time before bed or setting consistent bedtimes. Past studies show that better sleep hygiene reduces night terrors, Wolke said. (Being a poor sleeper on its own wasn't related to psychosis in the study.)