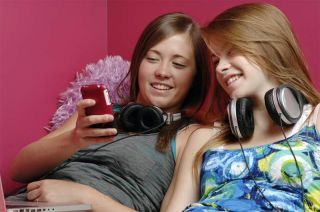 Parents have worried about the consequences of sexting, one of which could be legal trouble for participating in child pornography.
(Image: © Darko Zeljkovic | Shutterstock)

Teens today are constantly attending to their phones, texting and sharing with friends. But how much of what they share is sexual in nature?

Not as much as parents and others may have suspected.

"Sexting," a term that's become popular in the last 10 years, is the sending of sexually explicit messages or photographs, usually between mobile phones. Parents are worried not only how this sexually explicit content may impact children, but on the possible legal impacts of children producing what could be defined as child pornography, according to researchers. If convicted of child pornography, they may have to register as sex offenders.

"We really wanted to focus on the area of most concern, how often are kids creating images that could be child pornography, and what are kids doing when they received them," study researcher Janis Wolak, of the University of New Hampshire, told LiveScience. "Most kids are extremely responsible in their use of the Internet and cellphones … we aren't surprised to see that it's a very small group — 1 percent of kids — that are doing this."

A study on Cosmogirl.com, sponsored by the National Campaign to Prevent Teen and Unplanned Pregnancy found that 20 percent of teens ages 13 to 20 were sending "nude or semi-nude" images to others — these numbers are much higher because it included 18 and 19 year olds (images of whom wouldn't fall under child pornography laws)

Wolak and her colleagues, who work at the Crimes Against Children Research Center, focused on sexual image sending in children ages 10 to 18. In one of their new studies they surveyed children themselves, and in the other they interviewed police officers who had been involved in cases involving youth "sexting" photos.

The national survey of teens involved a total of 1,560 participants. They were asked about their experiences taking, sending or receiving "nude or nearly nude" images. If they responded that they had experiences with these types of images, the researchers asked specifically if the photos involved a naked breast, genital or bottom to determine if they could be considered child pornography.

Only about 21 percent of the youth appearing in or creating images had a negative reaction, saying they felt "very" or "extremely upset, embarrassed or afraid." Twenty-five percent of those receiving images felt the same way.

"Most kids had neither taken pictures of themselves or received those sorts of pictures," Wolak said. She also noted that the images, when they were created and shared, didn't usually make it beyond their intended recipient. Only about 10 percent were distributed. Most, about 85 percent, never reached the Internet, and stayed within the kids' mobile phone network.

Sexting as a crime

For the studies of criminal sexting, the researchers contacted about 2,500 police agencies, asking if they had dealt with any cases involving "youth-produced sexual images." About 532 of these agencies had dealt with sexting, a total of 1,447 cases, between 2008 and 2009. The researchers were able to do follow-up interviews detailing 675 of these cases.

They fell into three pots: About a third of the cases involved adults receiving youth-created images. Another third were strictly between youths, though these cases contained malicious actions that the researchers called "aggravated." The rest of the cases were youth-only "experimental" images that didn't seem to have any aggravating factors. In all, two-thirds of the cases involved sexually explicit images.

"In a lot of cases where kids were arrested, the cases were handled in juvenile court and the sentences involved things like community service," Wolak said. "Police seemed quite reluctant in most cases to treat kids like serious sex offenders."

Both studies were published in the December issue of the journal Pediatrics, and were performed by Wolak and her colleagues at the University of New Hampshire.