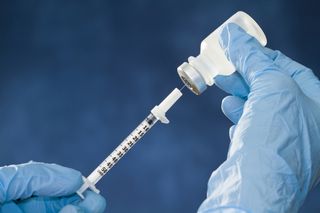 This season's flu vaccine will contain the strain of influenza virus that was predominant during last year's worse-than-usual flu season, according to the Centers for Disease Control and Prevention (CDC).

Last season, a particular strain of H3N2 flu virus — known as the "Switzerland variant" — circulated widely and was poorly matched to the H3N2 strain found in the vaccine, Dr. Tom Frieden, director of the CDC, said at a news conference today (Sept. 17). This season, the vaccine has been updated to better match that strain, he said.

Last year was a bad year for the flu, and the United States saw the highest hospitalization rates ever documented for people age 65 and older, Frieden said. [6 Flu Vaccine Myths]

The H3 type of flu tends to make seniors sicker than do other strains, he said.

Normally, the flu vaccine is between 50 to 60 percent effective, Frieden said. Still, last year's vaccine was quite effective against other strains of the flu, including the H1N1 strain, he noted.

About half of the U.S. population was vaccinated last year, with the highest coverage rates in those under age 5 and over age 65, Frieden said.

Young and middle-age people have "opportunities for improvement" in vaccination rates, he said.

This season, more flu vaccine is available than ever before: 171 million doses, the CDC reported. About 40 million doses have already been distributed, so now is a good time to get your vaccine, Frieden says.

The threat of pneumonia

Officials also highlighted the importance of the pneumonia vaccine at the news conference today.

Pneumonia is major complication of the flu and is particularly deadly in older people, said Dr. William Schaffner, medical director of the National Foundation for Infectious Diseases.

All adults ages 65 and older are eligible for the pneumococcal vaccine. In addition, adults ages 19 to 64 who have chronic illnesses such as diabetes and lung diseases are also eligible.

The schedule for the pneumococcal vaccine can be complicated — there are two vaccines, and the recommendations about getting them differ for people of different ages and with different health conditions. Because of this, Schaffner urged adults to discuss the vaccine with their health care providers.

Adults can receive the flu vaccine and the pneumococcal vaccine at the same time, he added.

How the flu shot is made

The CDC develops each season's flu vaccine in part by tracking the influenza viruses in the southern hemisphere, where the flu season runs from April through September, according to the agency.

Data so far from the southern hemisphere suggests that this year's vaccine will be a good match against this year's circulating viruses, Frieden said.

But "influenza is always changing," Frieden said, noting that this year the CDC will continue tracking the flu, looking for changes in the strains that are circulating. The agency has cut down the amount of time needed to make the vaccine, meaning it can be made later in the season, when the most up-to-date information is available.

For people who do come down with the flu, the CDC is prepared to distribute antiviral drugs.

Still, Frieden encouraged all people to get their flu shots: "Even when the virus isn't well-matched, it remains the single best thing you can do to protect yourself, your family and your community against influenza," he said.