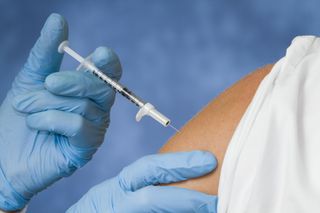 This year's flu season may be more severe compared with some recent years, and the current flu shot may not protect people as well against the disease, the Centers for Disease Control and Prevention said today.

As a result, the agency is urging people who become sick with the flu — especially those with certain underlying conditions — to speak with their doctor about receiving antiviral flu treatments.

The flu viruses in circulation change each season, and the predominant strain this year is H3N2, Dr. Tom Frieden, director of the CDC, said at a news conference today (Dec. 4). Flu seasons in which H3N2 predominates tend to have higher overall flu hospitalization and death rates, he said.

"We cannot predict what's going to happen in the rest of the flu season, [but] it's possible that we may have a season that is more severe" than usual, Frieden said. [6 Flu Vaccine Myths]

In addition, researchers have found that about half of the H3N2 flu strains in circulation are different from the H3N2 flu strain included in this year's flu vaccine, Frieden said. These differences can happen because the viruses' genetic material changes slightly, or "drifts" over time.

"They're different enough that we're concerned that protection from vaccination [for H3N2 viruses] may be lower than we usually see," Frieden said. Researchers first began seeing the drifted H3N2 strains in March, when it was already too late to incorporate them into this year's flu shot.

But the CDC still recommends people get their flu shot this year. That's because the vaccine still protects against other strains of flu, including H1N1. And people who do become sick with flu may have less severe symptoms if they are vaccinated, the agency said.

"If we have a severe season, getting a vaccine that provides even partial protection may be more important than ever," Frieden said.

Besides vaccination, there is an important "second line of defense" against flu: antiviral drugs, Frieden said. These drugs can reduce the severity and length of illness, reducing the likelihood that patients will be hospitalized, Frieden said.

These drugs are particularly important for people at high risk of flu complications, such as children younger than 5, older adults, pregnant women and people with certain health conditions, such as asthma, diabetes or heart disease, according to the CDC.

Treatment with antiviral drugs should begin as soon as possible after flu symptoms start, and people don't need to wait for a lab test result to confirm flu before beginning treatment, Frieden said.

"Antiviral drugs are greatly underprescribed," Frieden said. Fewer than 1 in 6 people who are severely ill with flu get antiviral drugs, and "it's very important that we do better," he said.