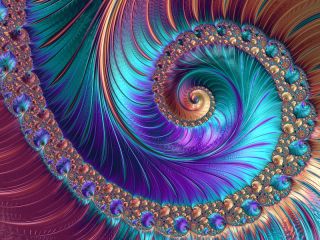 Chaotic systems are sometimes described using fractal patterns. A new theory tries to come up with a single, mathematical definition of chaos that could identify seemingly smooth situations with the potential for chaos.
(Image: © Kobol75/Shutterstock.com)

It's that point when a smooth river turns into a tumultuous swirl of white water, the tornado that unpredictably changes course on a dime or the wild interactions of three planets under one another's gravitational pull.

Although most people instinctively know chaos when they see it, there hasn't been one, single, universally agreed-upon mathematical definition of the term. Now, scientists have tried to come up with a mathematical way to describe such chaotic systems.

The new definition, which was described in a paper published in July in the journal Chaos, could help identify seemingly smooth situations where the potential for chaos lurks, said study co-author Brian Hunt, a mathematician at the University of Maryland, College Park. [5 Seriously Mind-Boggling Math Facts]

Mathematician Henri Poincaré first encountered the wild state while trying to describe the behavior of three celestial bodies under one other's gravitational influence. Their movements proved difficult to predict beyond a few steps, and he termed this kind of erratic motion "chaos." Unlike truly random behavior, however, those systems were still "deterministic," meaning that if one knew all the past laws and forces acting on the systems, one could perfectly predict where they would be in the future. (By contrast, at the subatomic scale, particles are fundamentally uncertain, meaning there's no way to perfectly predict what a given teensy particle will do.)

But scientists didn't really notice the chaos swirling in the universe until the 1960s, when computers had become powerful enough to crunch numbers and solve equations that couldn't be worked out on paper, said Edward Ott, an applied physicist at the University of Maryland, College Park.

Sometimes, such as in the case of a simple pendulum, computers could predict behavior far into the future just by knowing a few facts. But other systems were much weirder. For instance, computers needed a ridiculous amount of extra information just to predict what a weather system would do just a few days into the future, which is why a 4-hour weather forecast is typically spot-on but a 10-day forecast is little more than a historical guess. Go far enough into the future, "and, eventually, you won't know anything about what the weather is going to do," Ott told Live Science.

Once researchers realized that chaos was so often at play, mathematicians like Edward Lorenz began to develop newer theories for how these chaotic systems work. Yet decades later, no one had come up with a single, simple mathematical definition of chaos that seemed to perfectly capture all of these helter-skelter situations, Ott said.

So Hunt and Ott tried to tackle the problem. The team developed a definition of chaos that was deceptively simple, and roughly based on the quantity similar to entropy, or the inherent tendency of things in the universe to move from a more orderly to a more disorderly state. They found that, if this entropylike number, called expansion entropy, is positive, the system could become chaotic, whereas one with zero expansion entropy would not become chaotic.

In essence, the new method allows researchers to quickly capture the tendency for things to quickly spiral into an abyss of unpredictability.

"You could say you have chaos if you have exponential growth of uncertainty," Hunt told Live Science. "That could happen in relatively simple systems that people haven't been willing to call chaotic."

The findings could help scientists easily determine if there's a hidden possibility of chaos blooming in an otherwise very orderly system, Hunt said.

"One thing we're trying to do is identify when chaos is present but maybe only in rare circumstances," Hunt said.

For example, it could be used to identify hidden pockets of turbulence in the sky, Hunt said.