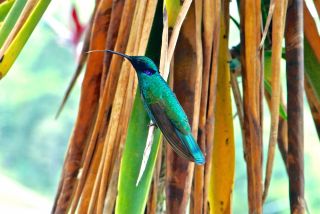 A male sparkling violetear (Colibri coruscans) hummingbird in Bogotá, Colombia. The bird has extended its tongue after feeding from a flower, preparing it for elastic expansion. Hummingbirds fuel their high-speed lifestyle with tiny drops of nectar and the occasional fly.
(Image: © Kristiina Hurme)

The slender hummingbird tongue has been misunderstood for more than 180 years, a new study finds.

Since 1833, scientists thought that hummingbird tongues used capillary action — a phenomenon in which liquid flows through narrow areas, even working against gravity — to slurp up floral nectar. Researchers got this intriguing (but wrong) idea because the birds have long groves on their tongues that look like open cylinders, said Alejandro Rico-Guevara, lead researcher of the new study and a research associate of functional morphology at the University of Connecticut.

But capillary action is slow, at least by hummingbird standards. Using high-speed videos, researchers in the new study determined that hummingbird tongues act as elastic micropumps, allowing the birds to feed at rapid speeds, Rico-Guevara said. [See Photos of Hummingbirds Sticking Out Their Tongues]

Most people are familiar with simple pumps — the drinking straw, for instance. When sipping a beverage through a straw, people contort their cheeks to create a vacuum in the straw and suction up the liquid, Rico-Guevara said.

The hummingbird's tongue works in a slightly similar way, but without a vacuum. After zipping toward a flower, the hummingbird flattens its outstretched tongue, and "the compressed tongue remains flattened until it contacts the nectar," the researchers wrote in the study. "After contact with the nectar surface, the tongue reshapes filling entirely with nectar."

To pull in the nectar, the top of the tongue (the part closer to the mouth) bends, so it's no longer flat, and this bending stores elastic energy, Rico-Guevara said. That energy helps draw the nectar out of the flower and into the bird's mouth, he said.

"We show that the tongue works as an elastic micropump," the researchers said. "Fluid at the tip is driven into the tongue's grooves by forces resulting from re-expansion of a collapsed section" of the tongue closer to the mouth.

This fast technique allows the bird to drain between five and 10 drops of nectar from a flower within 15 milliseconds (about 100th of a second), Rico-Guevara said.

"When the [hummingbird's] bill goes inside a flower, you don't see what is happening inside at all," Rico-Guevara told Live Science. "My first challenge was to make see-through flowers."

He used tiny glass tubes, filled them with artificial nectar and set up the high-speed video cameras near the tubes. This setup was repeated in a number of places, including Connecticut, Texas, California, Ecuador, Colombia and Brazil.

"I tried to get as many different kinds of hummingbirds as possible," Rico-Guevara said. "Not just to get different species, but [also] the crazy ones, the extreme ones, just to be able to generalize what happens" when they feed.

In all, he filmed 96 foraging bouts, which included 32 birds from 18 species licking up artificial nectar from the transparent tubes.

The researchers spent hours examining the footage. In 2011, they published a study explaining that the hummingbird tongue is not a capillary tube, but instead works by trapping fluid. However, they still didn't know exactly how it worked. In the new study, the researchers explained that the tongue is a tiny pump that can pull in nectar.

Rico-Guevara developed two computer models with Tai-Hsi Fan, an associate professor of mechanical engineering and expert on fluid dynamics at the University of Connecticut, to determine how the hummingbird's tongue works. One model represented capillary action, and the other emulated the elastic micropump. [Images: Beautiful Hummingbirds of the World]

"We translated all of the pieces into mathematics to create predictions that we could test," Rico-Guevara said. "The match was really great with the elastic micropump one, so we were very happy."

The models showed that if hummingbirds used capillarity in the wild, they would have to slow way down, he said. The elastic micropump method allows hummingbirds to lick a flower up to 20 times per second, or at 20 hertz.

"But if they were using capillarity, they would have to slow it down to 5 hertz," Rico-Guevara said. "Which is still pretty fast, but when you're out there and you have so much pressure [to survive], every millisecond counts."

The finding may prompt scientists to give existing hummingbird research a second look. For instance, earlier studies suggested that some flowers developed dilute nectar, which is easier for hummingbirds to consume via capillary action than is concentrated nectar.

But if hummingbirds don't use capillary action, then it's unclear why certain flowers have dilute nectar, Rico-Guevara said. (Dilution levels don't matter much for the elastic micropump method, he said.)

"We need to develop the models again and see why those flowers have those concentrations in general," Rico-Guevara said.

The study will be published online Wednesday (Aug. 19) in the journal Proceedings of the Royal Society B: Biological Sciences.