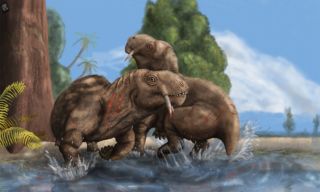 Ancient mammal-like reptiles that once grazed across the globe may have possessed many of the fighting tactics seen in modern herbivores, including head butting and attacks with giant fangs, researchers say.

A number of these extinct beasts also possessed complex, molarlike teeth on the roofs of their mouths, scientists added.

Before the rise of the dinosaurs, the most successful vertebrates on land were the ancestors of mammals — animals known as primitive therapsids that are sometimes called mammal-like reptiles. These ancient creatures included the anomodonts, which were the most abundant tetrapods, or four-legged animals, of the Permian period, which occurred about 250 million to 300 million years ago, right before the age of dinosaurs. [Images: Fossils Reveal Wacky Mammal Ancestors]

The new finding comes from an analysis of two such bizarre anomodonts, both the size of large dogs: Tiarajudens eccentricus and Anomocephalus africanus.

Vertebrate paleontologist Juan Carlos Cisneros at the Federal University of Piauí in Teresina, Brazil, and his colleagues recently discovered Tiarajudens eccentricus, an odd saber-toothed anomodont that once dined on leaves and stems amidst the dunes, ponds and streams of ancient Brazil. Although saber teeth might ordinarily conjure images of fearsome extinct predators, a number of modern herbivores possess these dagger teeth as well, such as the musk deer, water deer and muntjacs native to Asia.

The giant fangs of Tiarajudensmay have played many different roles. Among males, the saber teeth may have been used during fights against rivals "for territory, resources and females," Cisneros told Live Science. "The sabers could also be used against potential predators that existed in the middle Permian, such as dinocephalians and therocephalians. Tiarajudens could deter predator attacks by displaying the canines, or indeed fight back with them. Modern deer also fight back predators in this way."

Dinocephalians were the first really large tetrapods to walk on land, reaching lengths of about 11.5 feet (3.5 meters); the group included herbivores that practiced head-butting combat, much like stags and rams, Cisneros noted.

In their new analysis of anomodonts and dinocephalians, the researchers noted that combat strategies typical of modern herbivores likely evolved more than 250 million years ago, back when Earth's first complex groups of land herbivores emerged.

"We now know that as soon as the herbivores became more diverse in the middle Permian, they began to employ these forms of combat," Cisneros said.

In addition, in their new analysis, the scientists also discovered how anomodonts may have used strange, molarlike teeth on the roofs of their mouths to eat — unusually shaped lower jaws had molars that could fit together with those on the palate for an efficient chew.

The researchers compared 260-million-year-old fossils of T. eccentricus with those of Anomocephalus africanus, which lived at least 265 million years ago in what is now South Africa. Scientists had previously seen large teeth on the palates of T. eccentricus, but the lower jaws they had of this species lacked teeth, so the researchers could not say for sure how the upper and lower teeth worked together. The lower jaws of A. africanus revealed how anomodonts might have eaten with their odd teeth.

"These species chew by using the jaws and the roof of their mouths," Cisneros said. "Obviously, the rows of teeth in the palate had some space in between, otherwise the animals would bite their tongues!"

They detailed their findings online July 15 in the journal Open Science.