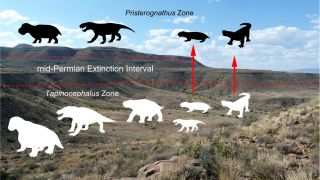 Researchers have found evidence for a little-known mass extinction that may have killed a good chunk of land animals some 260 million years ago.
(Image: © Wits University)

A little-known mass extinction may have killed up to about 80 percent of all vertebrates on land about 260 million years ago, researchers say.

This catastrophic die-off coincided with the onset of volcanism in what is now southern China, which suggests a cause for this calamity, the scientists added.

The history of life on Earth is ominously interrupted by mass extinctions. Over the past 500 million years, five mass extinctions — at times called "The Big Five" — are each thought to have annihilated anywhere from 50 to 95 percent of all species on the planet. Recently, scientists have suggested that a sixth mass extinction is beginning, a disaster caused by humans. [Wipe Out: History's 7 Most Mysterious Extinctions]

For two decades, scientists have proposed that another mass extinction struck Earth about 260 million years ago, at the end of the Capitanian stage at the Guadalupian epoch in the middle of the Permian period. Previous estimates suggested this crisis, known as the end-Capitanian, end-Guadalupian or mid-Permian mass extinction, eliminated at least 56 percent of land plant species and about 58 percent of all marine invertebrate genuses. (A genus is a group of closely related species. For instance, the genus Homo includes modern humans as well as extinct human lineages such as Neanderthals.)

However, because this proposed mass extinction took place so very long ago not many fossils have survived to conclusively support or deny its existence. This has led some researchers to suggest this mass extinction might not have occurred — instead of a sudden die-off, they argue that many extinctions might have taken place gradually over a long time.

To shed light on this mystery, paleontologists investigated the fossil-rich Karoo Basin, which covers about two-thirds of South Africa. "We've collected a huge database on fossils in the Karoo Basin over the past 30 years," said study co-author Bruce Rubidge, a paleontologist and sedimentologist at the University of the Witwatersrand in South Africa.

By analyzing specimens collected over decades, the scientists discovered that 74 to 80 percent of all land vertebrates apparently died off about 260 million years ago. "Previous research suggested that in the middle Permian, at the end of the Guadalupian, there was a big extinction event, and now we've got proof of that happening on land as well," Rubidge told Live Science.

Rubidge and his colleagues are especially interested in the origin of mammals. They focused on the ancestors of mammals — creatures known as primitive therapsids that are sometimes called mammal-like reptiles. Among the victims of this mass extinction were primitive therapsids known as dinocephalians, the first really large tetrapods, or four-limbed animals, to walk on land, Rubidge said. "These animals typically reached lengths of about 3.5 meters (11.5 feet)," he said. They found that most of the extinctions at this time occurred in genuses that belonged to the Dinocephalia group.

Moreover, the researchers found this mass extinction coincided with the onset of volcanism in what is now southern China. "Volcanism may have been the cause of this extinction event," Rubidge said.

In the future, Rubidge and his colleagues plan to collect more fossils to learn more about the extent of this extinction. "We also want to look at what happened after the extinction — what species came in, and how long did the fauna take to recover," Rubidge said.

The scientists detailed their findings online July 8 in the journal Proceedings of the Royal Society B.