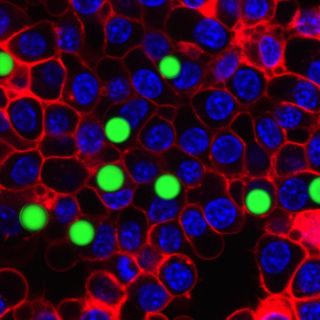 A number of cells containing lasers (green). The lasers can be used to uniquely tag thousands of cells.
(Image: © Matjaž Humar and Seok Hyun Yun)

For the first time, scientists have injected lasers into cells, making them light up from the inside, an advance that could one day help treat problems inside the human body such as cancer, researchers say.

Laser beams are created from chain reactions in which energized atoms stimulate one another. These chain reactions often require chambers lined with mirrors, in which light can bounce around, and back and forth, to stimulate the atoms within those chambers.

Now, scientists have figured out how to create miniature spherical chambers of mirrors that can be placed into cells — either soft chambers made of oil droplets or hard chambers made of solid beads of polystyrene, the same plastic used in Styrofoam. The interactions between the surfaces of these droplets and beads make their interior walls act like mirrors to certain frequencies of light. [Amazing Photos: The Little Things in Life]

In the new study, researchers loaded these microscopic chambers with fluorescent dye molecules, and when the scientists used short pulses of light to energize the dyes, the chambers gave off laser light. In experiments, these "intracellular microlasers" made pig skin and human tumor cells light up.

Each chamber generated negligible amounts of heat — less than 1.8 degrees Fahrenheit (1 degree Celsius), suggesting that lasers could be used safely in cells, the investigators said.

"We've long been interested in making lasers out of biological materials," said study senior author Andy Seok-Hyun Yun, a biomedical scientist at Harvard Medical School."Now, we have something we can put into cells, that can be injected or implanted into the body."

Lasers are used often in therapies — for instance, to set off light-activated drugs only when and where the lasers are shone, and not at other times or in other places in the body. Lasers are also often used to scan the body for problems, such as cavities or cancer.

One major limitation of these types of medical applications, however, "is that they can only be used where light can penetrate," Yun told Live Science. In contrast, the new technique places lasers into cells, thus allowing lasers to "reach more places inside the body," Yun added.

The researchers also noted that the light that the oil droplets emitted was very sensitive to the conditions inside cells. By carefully analyzing changes in the wavelengths these miniature lasers give off, scientists "can tell what's going on inside cells," Yun said. For instance, for the first time, they "could measure the forces exerted by the cell's 'skeleton,' the cytoskeleton," Yun said.

Monitoring conditions inside cells could be helpful for cancer research, Yun noted. "At the later stages of cancer, it can spread across the body — a process known as metastasis," Yun said. "It has to penetrate into tissues, break into blood vessels, travel to another location, break out of blood vessels and stay in distant locations in the body. During this process, the mechanical responses of cells change, such as how they squeeze through environments, how much force they exert in tissue.

"Being able to measure the mechanical properties of cancer cells in different stages could give you some idea of how to prevent metastasis," Yun said.

The researchers also found that the colors of light that the plastic beads emitted could vary greatly depending on their diameter and what combination of dyes they carried. The scientists said they could develop about 200 billion unique laser-based tags for cells, each made up of trios of beads of varying sizes and dyes.

Such tags could help researchers study diseases such as cancer. "There are billions of cells in tumors," Yun said. "It might be interesting to tag cells in tumors and see what happens to them when the tumors spread — what cells inside of tumors leave, when they leave and where they leave to. That could tell us a lot about how cancers spread, and maybe how to stop them from spreading."

Future research can investigate mirror chambers of different shapes — such as cylinders, rings and discs — as well as ones made of biodegradable materials that may be more compatible with the body than the materials used in this study.