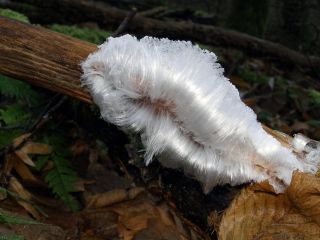 A century-long puzzle over how delicate strands of glistening ice burst through rotting tree branches, like heads of hair, is closer to being solved.

The strands, called "hair ice," exist only when cold-tolerant fungi are present, and scientists now understand how the fungi can stimulate ice growth.

Alfred Wegener, famous for his continental drift theory, first identified and studied hair ice in 1918. At the time, he suspected the ice formation was linked to the presence of mycelium — the roots of a fungus that live on rotting wood and absorb nutrients, forming a pale, white, cobweblike coating. However, it wasn't until about 90 years later that researchers found evidence that the fungal roots were vital precursors to hair ice. After treating mycelium-covered wood with a fungicide or dipping it in scalding water, hair ice didn't grow, they found. [See Stunning Photos of Hair Ice]

"The same amount of ice is produced on wood with or without fungal activity, but without this activity, the ice forms a crustlike structure," Christian Mätzler, a co-author of the study and professor emeritus at the Institute of Applied Physics at the University of Bern in Switzerland, said in a statement.

The fungus helps the ice grow into thin hairs with diameters of just 0.01 millimeters (0.0004 inches), and helps to keep the strands in this shape over several hours at temperatures close to 32 degrees Fahrenheit (0 degrees Celsius), he added.

"Hair ice grows mostly during the night and melts again when the sun rises," said Gisela Preuß, a biologist at the Wiedtal-Gymnasium in Neustadt, Germany, who captured some of the hair-ice photos for the new study. "It's invisible in the snow and inconspicuous in hoarfrost."

"When we saw hair ice for the first time on a forest walk, we were surprised by its beauty," Mätzler said. Although the hair ice typically melts the same day it forms, if the temperature stays below the freezing point and the air is humid, "it can last longer, but then it fades away," Preuß told Live Science in an email.

In the new study, Preuß examined samples of dead wood that bore hair ice from the winters of 2012, 2013 and 2014 in forests near Brachbach in western Germany. She looked at the wood pieces under a microscope and found 11 different species of fungi. One species — Exidiopsis effuse — appeared in every sample.

"Similar ice formations are known from soil and dead stalks of some plants, but up to now, there is no hint [of] the presence of a fungus in these cases," Preuß said.

From rotting wood to hair ice

The researchers also analyzed the melted hair ice and found fragments of the organic compounds lignin and tannin. Lignin, which is found in vascular plants including land plants like mosses and conifers, makes up about 20 to 30 percent of dry wood and helps give wood its hardness and resistance to rotting.Tannin also occurs widely in vascular plants, and protect plants from herbivories, who dislike its astringent taste.

However, certain fungi and bacteria can secrete the enzyme lignase and break down the lignin, causing rot with moist, soft and spongy bark that looks white or yellow. White rot can enhance the fungi's effects — the brightness of hair ice on wood increases as the wood decomposes, the researchers found, because the decomposed wood is brighter. [Ice World: Gallery of Awe-Inspiring Glaciers]

Fungus also acts as a hairspray by shaping the fragile ice hairs and keeping the strands in place, while lignin likely prevents recrystallization, which is the conversion of small ice crystals to bigger ones.

The hair ice is also influenced by the structure of the wood from which it radiates, the new study revealed. Tufts can grow outward from a branch, forming a center part much like human hair and can extend straight or curl back toward the branch. The latter radial growth pattern is more common and seems to be an extension of the natural rays that radiate in wood. All the strands grow 10,000 times longer than they are thick.

The researchers also found that the root of the hair ice — called a crystallization nucleus — is likely composed of lignin and tannin. When the air temperature drops sufficiently, water freezes into crystallization nuclei on the wood. Then, the nuclei create a passage for water to seep out of the pores of the wood and extend into ice hairs.

In future research, the researchers intend to fine-tune the details of the connection between the fungus and hair ice.

"I would like to let people realize that science can be unforgettably beautiful without any need for relevance for things that matter in human needs," Mätzler told Live Science in an email.

The study was published July 22 in the journal Biogeosciences.