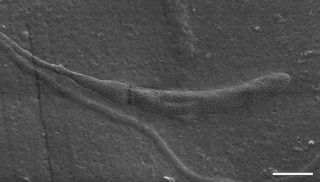 It's time to call Guinness World Records: Researchers on an Antarctic expedition have uncovered sperm cells dating to a whopping 50 million years ago, making these the oldest known animal sperm cells, a new study finds.

The researchers found the sperm fragments embedded within the walls of a fossilized cocoon. The scientists said they suspect that an ancient relative of worms or leeches likely created the cocoon while mating, and released its sperm inside.

"Because sperm cells are so short-lived and fragile, they are vanishingly rare in the fossil record," said lead author Benjamin Bomfleur, a paleontologist at the Swedish Museum of Natural History. "Our discovery of sperm in a leech cocoon from Antarctica is the oldest record of fossil animal sperm and one of only a tiny number of such fossils in the geological record."

The researchers discovered the cocoon while sieving sediments for small vertebrate remains during an expedition in Antarctica, Bomfleur said. The research team then used a scanning electron microscope to examine the fossil's surface, and the particles on it, at very high magnifications, he said.

The scientists also used high-power X-rays from a particle accelerator in Switzerland to image the cocoon's internal structure. These analyses revealed that the cocoon held bacteria and sperm cells, Bomfleur said.

"All we found are fragments of the drill-bit–shaped 'head regions,' ornamented midpiece regions that presumably contain the nuclei, and very long, whiplike tails, some attached to the midpiece regions," Bomfleur told Live Science in an email.

It's challenging to compare sperm fragments to the sperm of modern species, but the drill-bit-shaped head regions "do appear strikingly similar to those of this one peculiar group of leechlike worms that is today only found living symbiotically on crayfish in the Northern Hemisphere," Bomfleur said.

He added that the next-oldest known fossil of animal sperm is also from the Eocene, dating to about 40 million years ago. Researchers found that specimen, which belonged to a relative of insects called a springtail, in a piece of Baltic amber, Bomfleur said.

However, the oldest known fossil sperm cell doesn't belong to an animal, but to a plant called a chert found in Scotland. The plant dates to the early Devonian, about 410 million years ago, Bomfleur said.

The new study is a "well-done investigation," said Renate Matzke-Karasz, a geobiologist at Ludwig-Maximilian-University in Germany.

The finding of the "entombed micro-treasures" may help illuminate the family tree of worms and leeches, of which little is known because fossils of these soft-bodied creatures are rare, Matzke-Karasz said.

"I am sure a broader search for more such fossils will help create a clearer view on the evolution of these animals," she said.

The study will be published online Wednesday (July 15) in the journal Biology Letters.