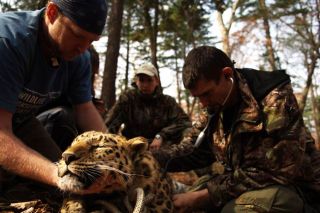 A photo of “Alyona,” a critically endangered Far Eastern leopard being examined by Clay Miller (right) of the Wildlife Conservation Society and John Lewis (left) of Wildlife Vets International who listens for abnormalities of the heart.
(Image: © Andrew Harrington)

At least one of the world’s rarest big cats is alive and well, according to scientists who captured, photographed and gave a check-up to a female Far Eastern leopard in Russia last week.

The Far Eastern leopard is perhaps the world’s most endangered big cat, with an estimated 25 to 40 individuals inhabiting a narrow strip of land in the far southeastern corner of the Russian Federation.

A team of scientists from the Wildlife Conservation Society (WCS) and the Russian Academy of Sciences Institute of Biology and Soils (IBS) captured one of these rare felines in Primorsky Krai along the Russian-Chinese border.

The leopardess, nicknamed “Alyona” by the researchers, was in good physical condition, weighing a healthy 85 pounds (39 kilograms). A preliminary health analysis revealed that she is between 8 and 10 years old. Alyona has since been released unharmed.

Specialists are continuing to analyze blood samples as well as an electrocardiogram, which will reveal genetic information to assess levels of inbreeding (the tiny leopard population is thought to have no more than 10 to 15 females).

Three leopards captured previously (2 males and 1 female) in 2006 and 2007 all exhibited significant heart murmurs, which may reflect genetic disorders.

“We are excited by the capture, and are hopeful that ongoing analysis of biomedical information will confirm that this individual is in good health,” said Alexey Kostyria, a senior scientist at IBS and manager for the WCS-IBS project. “This research is critical for conservation of the Far Eastern leopard, as it will help us to determine the risks posed by inbreeding and what we can do to mitigate them.”

One of the options scientists are considering is trans-locating leopards from other areas to increase genetic diversity — similar to the strategy used with Florida panthers, when animals from Texas were brought in to supplement the remaining population. Today, Florida panthers have risen from less than 10 individuals to a population of about 100.

Over the past 100 years, Far Eastern leopard numbers have been reduced by poaching and habitat loss. However, camera-trapping and snow-tracking surveys indicate that the population has been stable for the past 30 years, but with a high rate of turnover of individuals. If inbreeding or disease can be kept in check, WCS and its partners think there is great potential for increasing survival rates and habitat recovery in both Russia and Northeast China.

The Far Eastern leopard is listed under CITES (Convention on International Trade in Endangered Species), which protects it against illegal trade for fur and medicinal purposes.

The U.S. Congress is currently considering legislation called the Great Cats and Rare Canids Act, which would directly benefit the Far Eastern leopard and more than a dozen big cat and rare dog species by creating a fund for research and monitoring, law enforcement training, and other conservation efforts.