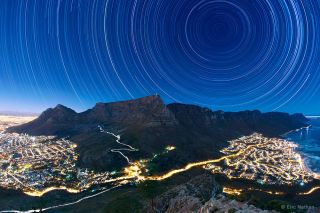 A vortex of stars seems to swirl above Table Mountain in South Africa in the winning image of this year's International Earth & Sky Photo Contest.

The contest highlights stunning "nightscapes," or images that combine the night sky with Earthly scenery. Winner Eric Nathan, a self-taught freelance photographer, stacked more than 900 30-second exposures to create the image, which shows star trails caused by the rotation of the Earth.

"The play of light patterns here, with the circling stars set against the urban labyrinths, makes this image a delight to explore, while at the same time showing the power of city lights to dominate the natural world," contest judge James Richardson, a National Geographic photographer, said in a statement. [See Winning Photos from the Earth & Sky Contest]

The juxtaposition of starlight and artificial light is a theme of the contest, which is in its sixth year. Those involved hope the contest focuses attention on the night sky, to promote the control of light pollution, according to The World At Night, the organization that runs the contest along with the National Optical Astronomy Observatory and Global Astronomy Month.

The overall contest theme was "Dark Skies Importance." Light pollution at night is such a problem that even the most remote telescopes are having trouble breaking through the glare. It's an issue affecting the Atacama Large Millimeter Array telescope in the desert in Chile, as well as telescopes in Arizona, according to astronomers who spoke at the 2013 American Astronomical Society meeting in Long Beach, California.

Light pollution isn't just a matter of aesthetics. Studies suggest that nighttime light exposure can affect health and the behavior of wildlife, from turtles to bats.

Nathan's photograph took first place overall in the contest, and also won the "Against the Lights" category — one of the contest's two categories — in which judges rated photograph entries that juxtaposed human-made lights with the night sky. Second place in the category went to Evgeny Trisko of Russia, who captured a shot of the Pik Terskol Observatory near Mount Elbrus, Europe's highest peak and one of the Seven Summits. In the photo, clouds, lit greenish-yellow by streetlights, advance over the observatory dome and partially obscure the glowing Milky Way above. Trisko also won fifth place in the contest's "Beauty of the Night Sky" category for a photograph showing villages under the sky in the Stavropol region of Russia.

Third place in the "Against the Lights" category went to Zhou Yannan of China, who captured the progression of a lunar eclipse over the city of Chongqing.

"Photographing elusive astronomical events through the dusty air of [the] brightly lit city of Chongqing would appear impossible," contest judge and astrophotographer David Malin said in the statement. "However, Zhou Yannan has managed to capture the orange light of the Earth's shadow crossing the moon during the eclipse as it rises through the flashing lights of countless aircraft."

The "Beauty of the Night Sky" category brought in contestants who let the dark sky shine. The winning entry shows a snow-covered forest underneath a dancing green aurora. The Pleiades and the Hyades, two star clusters, are visible through the aurora, and the snow sparkles in the moonlight. [See Stunning Photos of the Northern Lights]

"The green of the aurora is beautiful, but so too are the colors of the snow, crisp and white under the moonlight," Richardson said. The photograph was taken by Lyubov Trifonova in Murmansk, Russia.

Mount Rainier in Washington state appears lit by moonlight in the second-place winner in the "Beauty" category. Taken by photographer Brad Goldpaint, the image shows the Milky Way over the mountain. Third place went to photographer Ben Coffman, who captured the light of the moon sparkling on Crater Lake in Oregon. The Milky Way plays a starring role in Coffman's image, too.

Other winners in the contest include "The Dome," a panoramic view from Reykjavik, Iceland, crowned by an auroral arch, and "Strolls in the Star River," a psychedelic shot of the night sky over the Salar de Uyuni salt flat in Bolivia. A shot taken in June 2014 shows star trails over Bromo Tengger Semeru National Park in Indonesia, where a steaming volcano adds to the drama.

More than 800 photographs from 54 countries were entered into the contest. Some processing of pictures is expected, even necessary, given the low-light conditions, but judges excluded entries that were edited too heavily.

"Great captures can turn to lost opportunities when processed too much," contest judge Tunc Tezel said in the statement. "The night sky is beautiful enough as it is."