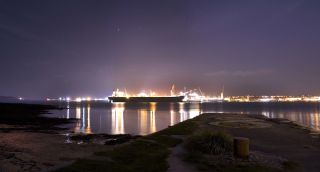 Constant exposure to light at night can cause depression, a new study in animals suggests.

In the study, hamsters exposed to dim light at night for four weeks showed signs of depression, such as less interest in drinking sugar water they usually enjoy, compared with animals not exposed to light at night, the study found.

The findings suggest exposure to artificial light at night may have contributed to the rising rates of depression over the last 50 years, said study researcher Tracy Bedrosian, a doctoral student in neuroscience at Ohio State University.

"The advent of electrical lighting permitted humans to stray from natural day-night cycles," potentially disturbing our biological rhythms and leading to changes in behavior, Bedrosian said.

But the study also suggests good news: the negative effects of light at night were reversed in the animals after just two weeks of normal lighting conditions, the researchers said.

"People who stay up late, in front of the television and computer, may be able to undo some of the harmful effects just by going back to a regular light-dark cycle and minimizing their exposure to artificial light at night," Bedrosian said.

The findings add to a growing body of research that light at night is bad for health. Earlier studies have found exposure to light at night may increase the risk of weight gain and certain types of cancer.

Hamsters exposed to dim light at night were less active each day, and were less mobile when placed in water compared to those that spent their nights in total darkness.

Studies of the hamsters' brains revealed a protein that may play a key role in how exposure to light at night leads to depression, the researchers said.

TNF is part of the body's immune response to infection, and causes inflammation. While this inflammation is necessary to fight off infection, it can be damaging if constant, the researchers said.

Pass it on:  Exposure to artificial light at night may have contributed to the rising rates of depression in recent decades.