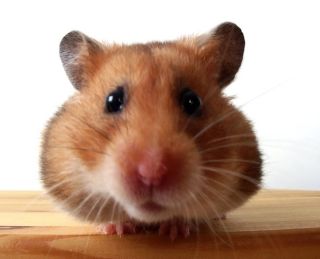 Hamsters are small rodents that are commonly kept as house pets. They are distinguishable from other rodents due to their short tails, stubby legs and small ears. Hamsters have many different colors, including black, grey, brown, white, yellow, red or a mixture of several colors.

With 24 species of hamsters, these animals come in a wide range of sizes. The European breed can grow as large as 13.4 inches (34 centimeters) long and are some of the biggest varieties of hamsters. The dwarf hamster lives up to its name. These tiny hamsters grow to around 2 to 4 inches (5.5 to 10.5 cm) long. The most common pet hamster, the Syrian hamster, also known as the teddy bear hamster or golden hamster, usually grows to about 6 inches (15.24 cm) long.

The first hamsters were discovered in Syria, though they also live in Greece, Romania, Belgium and northern China. In the wild, they like to live in warm, dry areas, like steppes, sand dunes and the edges of deserts.

Hamsters were brought to the United States in 1936 from Syria, according to the Louisiana Veterinary Medical Association. They were some of the first domesticated hamsters.

Hamsters are nocturnal, according to the ASPCA, which means they like sleeping during the day. In the wild, they dig burrows, which are a series of tunnels, to live and breed in. Hamsters will also store food in their burrows. Living underground keeps wild hamsters cool in hot climates.

Some hamsters are very social, while others are loners. For example, the Syrian hamster doesn't like living near other hamsters. They are very territorial and should never be put in a cage with other hamsters. It will bite the other hamster, and may even kill it. Dwarf hamsters, on the other hand, are social and like to have a friend nearby.

Hamsters like to eat seeds, grains, nuts, cracked corn, fruits and vegetables. Wild hamsters also eat insects, frogs, lizards and other small animals. A captive hamster's diet should be at least 16 percent protein and 5 percent fat, according to Canadian Federation of Humane Societies.

Hamsters' name comes from the German word “hamstern,” which means “hoard.” This is a very apt way to describe how hamsters eat. They have pouches in their cheeks that they stuff with food. Then, they will carry their hoard back to their colony so they can eat it later. Pet hamsters will often store food under their cage bedding.

Male and female hamsters waste no time when mating with one another. If you put two opposite gender hamsters into a cage together, the female will become pregnant very quickly. Their gestation period lasts 15 to 20 days.

After the birth, the litter is blind until they are two weeks old and at 3 to 4 weeks the young are weaned. Females tend to have two to three litters per year. Hamsters typically live one to two years, but can live up to three years in captivity.

Golden hamsters are considered vulnerable to extinction by the International Union for Conservation of Nature and Natural Resources' Red List. This breed is found in Syria, where agriculture and human development are taking over the hamster's natural habitat.

Generally, hamsters are ideal house pets because they are gentle and are easy to take care of. They will bite when startled or scared, though. They will also bite if they are awakened during their sleeping time. Since they sleep during the day and humans are awake during the day, this means that biting is more likely.

Hamsters have very poor eyesight. Their scent glands on their backs secrete an easily identifiable smell. To find their way around, they leave a trail of scent by rubbing their backs against objects. When a hamster needs to find their way back home, they will use this scent trail as a guide.

Hamster's teeth grow continually. Chewing on wood or twigs keeps their teeth short. Without something to chew on, their teeth would grow so long they would injure the roof of the mouth and lips.

A mother hamster is very protective. If she fears that her babies are in danger, she will put the babies in her mouth pouches and carry them to safety.