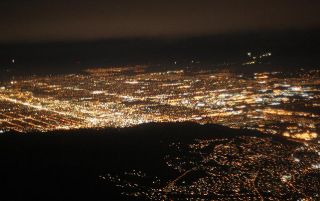 Light pollution is dimming the night skies for even some of the most remote telescopes. Here, light pollution from Salt Lake City.
(Image: © makelessnoise | Flickr.com)

LONG BEACH, Calif. — Humans have looked up to the night skies and seen thousands of glittering stars since the dawn of time, but streetlights and illuminated signs have increasingly obscured that majestic view. Now astronomers are saying those lights increasingly pose problems for even the most remote telescopes.

Blue light-emitting diodes (LED) pose the most serious threat, because blue light scatters much more in the atmosphere than other wavelengths and often heads right back down toward giant telescopes.

Artificial light "decreases astronomers' ability to see faint objects, makes the effective size of telescopes smaller and makes some observations impossible," Richard Wainscoat, an astronomer at the University of Hawaii, said here at the 221st annual meeting of the American Astronomical Society.

Stargazing has been a beloved pastime for millennia. Ancient people marked the seasons and the months using constellations, and associated celestial bodies with heavenly gods.

But for the past several decades, those night skies have become increasingly lighter as electrified cities grow and more people live modern urban or suburban lifestyles. [Night Lights: Stunning Views of Earth From Above]

Light fixtures installed in the 1980s were usually sodium-based, and emitted a yellowish glow. Newer streetlights are starting to use LEDs, which emit blue light, a much bigger problem for astronomers and other skywatchers.

Unlike yellower light, blue light scatters in the atmosphere like pinballs, and often heads right back to the ground.

Mauna Kea Observatory, a telescope perched on a mountain 13,700 feet (4,200 meters) above sea level, is protected somewhat from light pollution by its height and the clouds that shroud the valleys below. But Chile's iconic telescopes, such as the Atacama Large Millimeter Array (ALMA), are seeing increased light pollution on the horizon from nearby towns and cities.

And in Arizona, telescopes like the Kitt Peak Observatory have had to contend not just with light pollution from Phoenix and Tucson, but also large blue light LED billboards that were illegally installed throughout the state, said Richard Green, an astronomer at the University of Arizona.

To reduce light pollution, streetlights should be completely shielded so that light doesn't leak out the sides, Green said.

Rays emitted slightly above horizontal will bounce around the atmosphere, while light angled downward mostly leaves the atmosphere. This measure can also improve glare and save money through energy efficiency, because less light is being "wasted" pointing upward.

In addition, towns and cities can advocate for filters on blue light LEDs. In general, blue light is hard on the eyes, so filtering the most damaging wavelengths can make the night environment more pleasant, Wainscoat said.

Using artificial illumination only when needed, for instance, by installing motion-sensitive lights, can also darken the night skies. Light curfews and tighter local ordinances requiring context-appropriate lighting (an example would be preventing giant billboards from installing lights that glow in an otherwise dark locale) are also critical, Green said.

And local and national governments can do a better job of enforcing light ordinances already on the books. For instance, the northern provinces of Chile, which have several of the world's most cutting-edge telescopes already have tight rules on when, where, and what type of lights can be installed, but with no enforcement, those rules are often flouted, Green said.