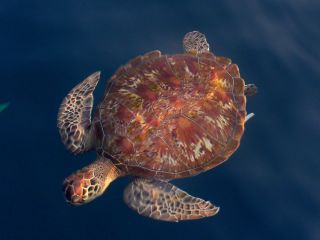 A loggerhead sea turtle swimming in the waters off the coast of Israel.
(Image: © Tessa Mazor)

Light pollution along the Mediterranean is changing the nesting habits of sea turtles in Israel, according to new research.

Orbital pictures of the region, coupled with sea turtle nesting data from Israel's National Parks Authority, revealed that the species of turtles in that area cluster their nests in darker spots.

"The two species of sea turtle in our study are nocturnal nesters. It is thought that the light pollution along the coast at night could disrupt visual cues. Visual cues are important for sea turtles for other functions, such as finding the sea after nesting or hatching," lead researcher Tessa Mazor, a Ph.D. candidate at the University of Queensland, told LiveScience.

"The impact of night lights on beaches and the disruptive impact it has on the process of hatchlings finding the sea is well documented and researched. In comparison, the disruption caused to nesting sea turtles is not well known," Mazor wrote in an email.

In general, Mazor said, female sea turtles nest on beaches and they return to the same nesting beaches where they were born, often within 6 miles (10 kilometers) of their hatching site.

In the Mediterranean, the nesting season takes place between May and September, with a single female able to lay up to eight nests. A female turtle generally moves to the beach at night, digs and deposits a clutch of anywhere between 40 and 200 eggs into the sand, then covers it and leaves it behind.

The hatchlings, when they emerge two months later during the night in order to avoid predators, are particularly vulnerable to night lights, Mazor noted.

"During this process of finding the sea, the hatchlings are vulnerable to disorientation by artificial lighting and so some of them head the wrong direction [for example] towards roads. Others can be predated by foxes, dogs, birds," she said.

Mazor's group was interested in how nesting sites are affected by night lights. Imagery of Israel came from a 2007 satellite image from Argentina's SAC-C satellite as well as a 2003 image taken by an astronaut on Expedition 6 aboard the International Space Station.

After taking into account how the beaches are geologically structured, and the impacts of human activity, the study still found a significant relationship between night light intensity and nesting. Turtles preferred nesting in the darker regions.

"Our findings are one of the first to show that night lights estimated with satellite-based imagery can be used to explain sea turtle nesting activity over a large-scale area," Mazor said.

The results could be applied to other Mediterranean locations due to the high intensity of coastal activities, she added, but also have applicability worldwide.

"Most sea turtle species are nocturnal nesters and thus affected by artificial night-light activity, so these results would apply in areas where nesting beaches are close by to cities and human activities," she said.

The researchers suggested the results of the study could aid in conservation efforts by guiding authorities to create reserves in darker areas along the coastline, perhaps by taking steps like restricting lighting after certain hours.

Most sea turtles are endangered worldwide due to human fishing activities (they often get accidentally caught in nets and drown before they can be released) as well as growth in coastal populations and tourist activities along coastlines.

"We must understand threats to species at broader scales and don't always have the time and manpower to carry out such large on-the-ground experiments," Mazor said.

"In areas where field locations are inaccessible or areas are too vast, satellite imagery and remote sensing can aid us to identify and explore threats."

Mazor's group's work was published in the March 2013 issue of the journal Biological Conservation, with participating researchers from Australia, Italy and Israel. Her next step will be to examine the effect of climate change on nesting beaches in Israel and the Mediterranean.

"An interesting biological trait of sea turtles is that the temperature of the sand determines the sex of the species. Within the sea turtle nesting temperature range (25-33 degrees Celsius,[77-91 degrees Fahrenheit]) females are produced at higher temperatures and males at lower temperatures," she said, so changes wrought by climate change could alter the distribution of the sexes within the species.