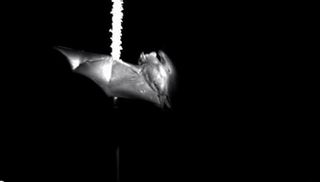 Sowell's short-tailed bats prefer to eat in the dark rather than in artificial light.
(Image: © Screen grab from video, www.batlab.de, Leibniz Institute for Zoo and Wildlife)

Light pollution may slow the recovery of deforested rainforests by scaring away bats that would otherwise help disperse seeds and regenerate plant growth, according to a new report.

Deforested ecosystems rely on seed-dispersers — fruit-eating animals such as birds and bats — to help re-introduce seeds into empty plots. Frugivorous (or fruit-eating) bats are among the most important seed dispersers in tropical rainforests because they defecate while flying, emitting large quantities of seed-rich feces known as "seed rain" across wide areas. Birds, on the other hand, don't defecate while flying but instead release their droppings from isolated perches.

"Birds don't evenly distribute seeds," Daniel Lewanzik, a researcher at the Leibniz Institute for Zoo and Wildlife Research in Berlin, told Live Science. "But bats fly over open areas and defecate while flying, so they disperse the seeds in a more homogenous manner."

This important ecological role may now be threatened by increasing levels of light pollution throughout Central American rainforests, Lewanzik and colleagues recently found in a study showing that bats were more likely to feed in dark conditions than in artificial light. Similar behavior has also been found in insect-eating bats, but this was the first study to show light-sensitivity in fruit-eating bats. [Flying Mammals: Gallery of Spooky Bats]

To test how light pollution affects the feeding behavior of tropical frugivorous bats, Lewanzik and colleagues conducted field and laboratory experiments on Sowell short-tailed bats — a species common across Central America — in which they manipulated light levels and counted the number of fruits eaten under different conditions.

This light avoidance probably helps bats hide from predators, and may also result from light sensitivity in their eyes, Lewanzik said.

"It could be that bats get dazzled by the light," Lewanzik said. "The [bats'] eyes are adapted to work best at low light intensities, such that the eyes might need some minutes after being exposed to bright artificial lights to recover and to function again."

"Bats are so important for deforested areas because they not only bring seeds into open areas but also feed on pioneer plants," Lewanzik said. "Many plants can't deal with those conditions, but those pioneer plants can."

The researchers suggest that limitations on light pollution could be enforced to help establish dark corridors that would encourage bats to travel across empty plots and continue to transfer seeds across wide regions. How large these corridors would need to be in order to be effective remains unclear, Lewanzik said.

The study findings are detailed today (March 10) in the Journal of Applied Ecology.