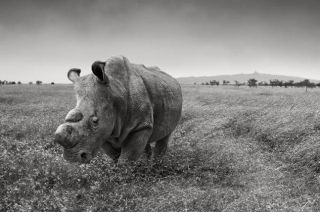 For decades, humans have slaughtered Africa's rhinoceroses, driven by the Eastern medicine market's demand for their horns. On a reserve in Kenya, the end result of this decimation lives out his old age under armed guard, his horn docked to make him less valuable to poachers. Such is the life of Sudan, the last male northern white rhinoceros on Earth.

Now, researchers at the Ol Pejeta Conservancy, Sudan's home, and elsewhere are rushing to save this subspecies, of which only five individuals remain. A natural pregnancy is impossible at this point, according to experts, who have turned to assisted reproductive technology instead. And though Sudan is the only male northern white rhinoceros left alive, the real technical challenge will come in harvesting enough eggs from the four remaining females to achieve a viable baby rhino.

"It's kind of a race against time," said Richard Vigne, CEO of Ol Pejeta. "Those remaining females could all die tomorrow. Once they're gone, then the source of eggs disappears." [In Photos: The Last 5 Northern White Rhinos]

The northern white rhino (Ceratotherium simum cottoni) didn't disappear overnight. The subspecies had the misfortune of existing in areas torn apart by conflict, poverty and war: Uganda, Sudan, the Central African Republic, the Democratic Republic of the Congo, and Chad. Though there were at least 2,000 northern white rhinos roaming this habitat in the 1960s, according to the Ol Pejeta Conservancy, human poaching beat their numbers back to mere dozens in the Democratic Republic of the Congo's Garamba National Park by the 2000s.

In 2005, four northern whites still roamed Garamba, but they haven't been seen since 2007, and the subspecies is now assumed extinct in the wild.

Conservationists have been sounding the alarm about northern white rhinos for decades, but efforts to save the subspecies have become urgent, particularly as the elderly rhinos still in captivity begin to die off. In October 2014, Ol Pejeta lost 34-year-old Suni, a male. Mere months later, in December, the second-to-last male northern white rhino on Earth, Angalifu, died at the San Diego Zoo.

And then there were five

Now, only five northern white rhinos remain, and the chances of any of them breeding naturally are miniscule. Sudan will turn 42 this year, and he can hardly mount a female, Vigne said. His semen quality is also poor, likely because of his age.

Moreover, the two females at Ol Pejeta, Najin and Fatu, are incapable of carrying a pregnancy. Najin is old and has problems with her legs that make it impossible for her to sustain the weight of a male mounting her, and likely impossible for her to carry the extra weight of a 16-month-long rhinoceros pregnancy. Fatu has a uterine condition that makes breeding her unlikely, Vigne said.

Nola, the only remaining female northern white rhino at the San Diego Zoo, is at least as old as Sudan, far past reproductive age. The fifth and final northern white rhino left is Nabire, a 31-year-old female at the Dvur Kralove Zoo in the Czech Republic — and she has uterine cysts.

Now that natural breeding attempts have failed, veterinarians and conservationists are turning to in vitro fertilization (IVF) to try to save the subspecies. In IVF, eggs are extracted from a female, and are fertilized by sperm extracted from a male in a laboratory culture. After a few days of development, the resulting embryo is re-implanted in the uterus to grow.

This might seem simple in a world where human babies are born via IVF every day, but no one has ever successfully conducted the procedure on a rhinoceros. [5 Myths About Fertility Treatments]

"Every species requires different culture conditions, and that's because the actual conditions in the uterus in the animal are different," said Barbara Durrant, director of reproductive physiology at the San Diego Zoo Institute for Conservation Research.

So first, researchers must develop a rhino IVF procedure. They're starting with a blueprint developed for horses, Durrant told Live Science, which are close relatives of rhinos. Unfortunately, Durrant said, IVF has proven difficult in horses.

And rhinos have their own challenges. Their reproductive tracts are large and difficult to access. Like humans, they ovulate only every 30 days or so, meaning there are few mature eggs to harvest. Researchers can collect immature eggs directly from the ovaries, but first, they have to learn how to get them to mature outside the body, Durrant said.

Next, these eggs must be fertilized. In order to save precious, limited northern white rhino sperm, Durrant and her colleagues in San Diego are working on a technique called intracytoplasmic sperm injection. With this method, the researchers pick a single sperm cell and inject it directly into an egg, instead of bathing an egg in sperm. Researchers at Ol Pejeta and the Dvur Kralove zoo are similarly working to harvest eggs from their northern whites and to develop IVF procedures. Keepers on all three continents where the rhinos reside work closely together on these efforts, said Jan Stejskal, director of communication and international projects at Zoo Dvur Kralove. (Ol Pejeta has a crowdsourcing campaign for protection of their rhinos.)

"It's been done once — actually, maybe twice — with no embryo development beyond the two-cell stage," she said.

So researchers are hedging their bets. At San Diego, Durrant and her team are exploring advanced genetic technologies: They've harvested regular rhino cells and turned them into stem cells, which are cells capable of becoming any sort of body cell — including sperm and egg.

"We could have a source of eggs that we could actually produce in the lab," Durrant said.

"Now, that's not ideal," he said. "But what it would do, assuming the calf is viable as an animal and reproductively viable, is save some of the genetic traits which are currently present in pure northern white rhinos, and which would be needed in the future to reintroduce white rhinos back into central Africa."

In other words, the species would be gone, but some of the adaptations that enabled it to survive in its habitat would live on. This genetic diversity might be crucial to rhinoceroses as a whole, as the northern white is hardly the only species on the brink. There are fewer than 5,000 black rhinoceroses (Diceros bicornis) left. In Indonesia, there are a mere 35 Javan rhinos (Rhinoceros sondaicus) left, and hardly more Sumatran rhinos (Dicerorhinus sumatrensis). [See Photos of All 5 Rhino Species]

"What's happened to the white rhino actually could happen just as easily to other species of rhino around the world," Vigne said. Any IVF techniques developed to save the northern white might be mustered to save other species, he added.

The question, of course, is whether any of these IVF techniques will be successful — and when. Under ideal circumstances, with no surprising roadblocks, it might be possible to get a viable pregnancy in five years, Durrant said. Some of today's surviving white rhinos may live long enough to see the next generation.

But five years is an optimistic estimate.

"I think we will be successful in saving the species," Vigne said. "But it might mean that the last remaining animals on the planet die off first."