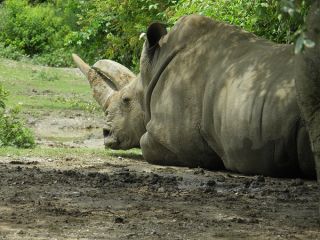 The oldest female Southern white rhino in the world lives at Audubon Zoo in New Orleans.

Macite is 48 years old. She's been at Audubon Zoo since 1998, when animal experts added her to Audubon's group in a successful effort to stimulate breeding between the established pair of the group, Saba and Yvonne.

Yvonne and Saba just weren't breeding, said Audubon Zoo general curator Rick Dietz. But when Macite joined the group, she stirred things up enough to get some activity going, and Yvonne produced a baby in 2003.

Today, Macite is on supplements for arthritis, but otherwise shows little evidence of her advancing years. Curators hope she continues to ignite sparks between Saba and Yvonne.

Another birth would be a significant contribution to the white rhino population, said Dietz. Even though Macite has no offspring of her own, she has played a major role in helping her species survive.

Southern white rhinos live about 45 years in zoos. A male rhino in Germany holds the world record as the oldest white rhino in the world at 53 years of age.

Native to Africa, increasing numbers of white rhinos are encouraging to conservationists, as rhinos rebounded from a dangerously small population a century ago to more than 15,000 today.

Macite, Yvonne and Saba are all seen at Audubon Zoo's African Savanna exhibit.