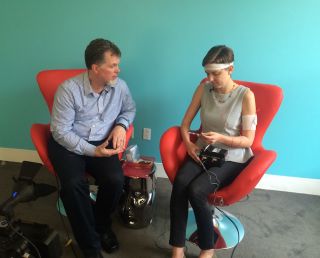 NEW YORK — The first thing I noticed was the stinging, as if a fire ant were attacking my right temple.

But this was no fire ant — it was current flowing through an electrode, oozing conductive gel, that was stuck to my head. Another electrode was strapped to my left arm, and both were connected by a series of wires to a small black box containing some electronics and a couple of 9-volt batteries.

Transcranial direct current stimulation, or tDCS, is a noninvasive form of brain stimulation that involves passing a current between electrodes on the scalp. The technique is one of a number of technologies being tested to see if it can enhance cognitive functions, such as boosting the performance of drone pilots or image analysts.

Michael Weisend, a neuroscientist at Rio Grande Neurosciences, a San Francisco-based company that develops a variety of noninvasive brain stimulation technologies, visited Live Science last week to showcase the technology. He gave me a taste of what it's like to have your brain juiced with tDCS. [See video of me having my brain zapped]

"What we're doing today is demonstration, not an experiment," Weisend, who is also a senior research scientist at the Wright State Research Institute in Beavercreek, Ohio, and an adjunct professor of translational neuroscience at the Mind Research Network, a nonprofit in Albuquerque, New Mexico, told me.

First, Weisend strapped a patch of circular electrodes to my left arm, and another patch of electrodes to my right temple. Some tDCS studies place both electrodes on the head, but that makes it more complex to analyze the stimulation's effects, he said.

Next, Weisend squirted both electrodes with a conductive gel, which helps maintain a good connection. (Weisend showed me the scars on his arm where he had burned off skin while testing different kinds of electrodes.)

The current was set to 2 milliamps, about 1,000 times less than the electrical current that flows through a typical iPad charger. But only about 1/50th of that current makes it through the skull to the brain, Weisend said. The stimulation, which lasted for 10 minutes, was aimed at my right inferior frontal cortex and the right anterior temporal lobe, which are brain areas thought to be important for learning. If this were a real experiment, Weisend would have scanned my brain first to determine the optimal placement for the electrode, but in my case, he made an approximation.

I turned the electricity on myself, and the first thing I noticed was the mild stinging where the electrode attached to my head. Weisend assured me this was normal, but said if the sensation continued, he would turn it off and try to get a better connection. Next I noticed a slight taste of metal in my mouth, a common side effect of tDCS, according to Weisend.

The cognitive effects, if any, were subtle. I tried playing the popular puzzle game "Bejeweled" briefly, before and during the stimulation. But having never played the game before, there was no way of knowing if I'd improved. (I did find myself playing and enjoying the game again later — game developers, take note!)

At one point during the stimulation, while Weisend was talking to me, I got the sense that I was focused on his face and words, to the exclusion of my peripheral vision. I also felt pretty calm for the rest of the afternoon, but perhaps these were just placebo effects. In Weisend's studies, he controls for such effects by using a double-blind study paradigm, in which neither the participants nor the experimenters know whether the stimulation is real or "sham" (a brief burst of current that then turns off).

Later in the day, I felt somewhat tired and developed a very mild headache, but this could just as likely have been due to a long day of work and mind-numbing commute as to a few milliamps passing through my brain for 10 minutes.

Is it safe? Does it work?

Although tDCS is an experimental method, it is widely regarded as safe, and doesn't appear to cause any short-term harm. The most common side effects of the stimulation include tingling or skin irritation and seeing phosphenes (light rings or spots not produced by actual light). Other side effects include fatigue, headache and itching under the electrode. In rare cases, people can experience nausea or insomnia, according to a 2007 study in the journal Brain Research Bulletin. [9 Odd Ways Your Tech Devices May Injure You]

Weisend said he has used the technique on about 500 people, and only once did someone feel discomfort, and ripped the electrode off. Because of the rapid change in voltage, the person went blind for 30 seconds, but then regained normal sight, Weisend said.

Some studies have found impressive gains in performance from tDCS, while others suggest the technique has little effect. That hasn't stopped some adventurous amateurs from testing homemade devices on themselves, though this is not recommended.

Scientists are still investigating how tDCS works, but the reigning hypothesis is that it changes the excitability of a particular brain region. Depending on the direction of the current, the stimulation could make neurons in a particular area of the brain more or less likely to fire, Weisend said. Brain stimulation is "like going to the gym," Weisend said. If you go once, you just get sore muscles, but if you keep going, you'll get stronger over time.

Weisend's recent studies have focused on using tDCS to boost the performance of image analysts for the U.S. military. In 2013, he and his colleagues published a study in the journal Behavioral Neuroscience in which they performed brain stimulations on members of the Air Force who were training to recognize objects in radar images. The study found that participants who received the training and stimulation were about 25 percent more accurate in identifying the objects than those with sham stimulation or no stimulation.

Other studies claim to have found benefits in everything from mental arithmetic to memory. But a large meta-analysis published in January in the journal Brain Stimulation found no evidence of cognitive effects from a single session of tDCS. "It looks like the evidence says tDCS is not doing anything," study co-author Jared Horvath, a neuroscientist at the University of Melbourne, in Australia, told IEEE Spectrum.

But research on tDCS is not limited to seeking cognitive boosts. Many scientists are also investigating its efficacy in treating mental disorders, such as traumatic brain injury and schizophrenia. However, the U.S. Food and Drug Administration (FDA) has not yet approved the technique.

Of course, tDCS is only one of several types of noninvasive brain stimulation. Other notable methods include transcranial magnetic stimulation, or TMS, which uses a magnetic coil to induce small electrical currents in the brain. In contrast to tDCS, TMS actually causes neurons to send signals, or "spike." And TMS has been FDA-approved for treating depression and migraines.

These forms of brain stimulation may be relatively new, but humans have been tinkering with the brain for centuries — from the Romans' use of electric fish to treat headaches to the slew of pharmaceuticals prescribed by psychiatrists. Brain stimulation may be the next frontier, but as for me, I'll stick with my morning cup o' Joe for now.