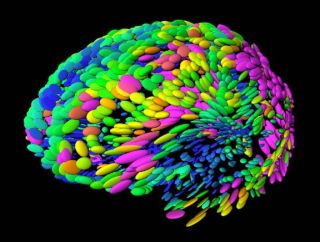 UCLA scientists created these template brain images that can be compared with brains of test subjects to show differences related to aging and disease, for instance. The variation in color and shape of the spheres that make up the brain show the magnitude and direction of these differences.
(Image: © Paul Thompson and Arthur Toga, UCLA.)

Single brain cells, if confronted with a difficult task, can identify objects as dissimilar as sports cars and dogs, new research finds.

Researchers have never been sure exactly how specialized cells in the brain can be. Do different neurons each contribute to unique thoughts or can some neurons be cognitive "generalists" and participate in multiple thoughts? To answer this, MIT researchers examined the prefrontal cortex, the brain's executive in charge of decision-making and planning.

A separate study last year found that a memory can be stored in a single brain cell.

And in other previous studies, Earl K. Miller, a professor of neuroscience at MIT's Picower Institute for Learning and Memory, found that individual neurons in monkeys' brains can become tuned to the concept of "cat" and others to the concept of "dog."

This time, Miller and colleagues Jason Cromer and Jefferson Roy recorded activity in the monkeys' brains as the animals switched back and forth between distinguishing cats vs. dogs and sports cars vs. sedans. Although they found individual neurons that were more attuned to car images and others to animal images, to their surprise, there were many neurons active in both categories.

In fact, these "multitasking" neurons were best at making correct identifications in both categories, according to an MIT statement.

The study suggests that cognitive demands — how much brainpower is needed for a particular task — may determine whether neurons in the prefrontal cortex "multitask" or stick to specialized categories.

"This ability to 'multitask' allows the brain to re-utilize the same pool of neurons for different tasks. Without it, storage capacity for critical thought might be severely limited," Miller said. The work could lead to a better understanding of disorders such as autism and schizophrenia in which individuals become overwhelmed by individual stimuli. For instance, a person with autism, when asked to picture a dog, may be flooded with dozens of mental images of all the canines he had ever seen.

Whether or not prefrontal cortex neurons are generalists or specialists had been unresolved because virtually all neurophysiologists train monkeys on a single cognitive problem.

In this study, Picower researchers investigated how the prefrontal cortex encodes multiple, independent categories in monkeys trained to randomly alternate between performing two category problems. Wearing devices that allowed researchers to identify activity in individual neurons, the monkeys were presented with morphed images, such as that of a sports car with attributes of a sedan or a cat with attributes of a dog. If the image was more than 50 percent like a sports car or a cat, the monkeys had to identify it as such to get a reward.

The monkeys scored correctly 80 percent of the time.