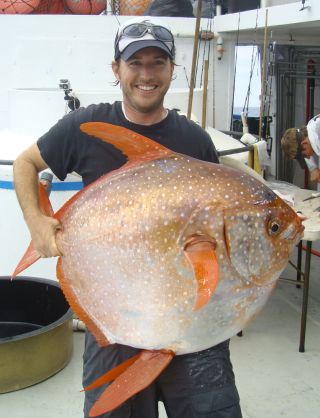 The car-tire-size opah is striking enough thanks to its rotund, silver body. But now, researchers have discovered something surprising about this deep-sea dweller: It's got warm blood.

That makes the opah (Lampris guttatus) the first warm-blooded fish ever discovered. Most fish are ectotherms, meaning they require heat from the environment to stay toasty. The opah, as an endotherm, keeps its own temperature elevated even as it dives to chilly depths of 1,300 feet (396 meters) in temperate and tropical oceans around the world.

"Increased temperature speeds up physiological processes within the body," study leader Nicholas Wegner, a biologist at the National Oceanic and Atmospheric Administration (NOAA) Fisheries' Southwest Fisheries Science Center in La Jolla, California, told Live Science. "As a result, the muscles can contract faster, the temporal resolution of the eye is increased, and neurological transmissions are sped up. This results in faster swimming speeds, better vision and faster response times."

The result, Wegner said, is a fast-swimming fish with an advantage for hunting slow, cold-blooded prey. [See Photos of the Gigantic Warm-Blooded Opah (Moonfish)]

The opah, also known as the moonfish, has relatively small red fins decorating its large, round body, which can grow up to 6 feet (1.8 meters) long. These fins, which flap rapidly as the fish swims, turn out to be important in generating body heat for the opah.

"The opah appears to produce the majority of its heat by constantly flapping its pectoral fins which are used in continuous swimming," Wegner said.

Researchers first suspected that something might be strange about the opah after analyzing a sample of the fish's gill tissue. According to the new study, published today (May 14) in the journal Science, the blood vessels in the tissue are set up so that the vessels carrying cool, oxygenated blood from the gills to the body are in contact with the vessels carrying warm, deoxygenated blood from the body to the gills. As a result, the outgoing blood warms up the incoming blood, a process called counter-current heat exchange.

"There has never been anything like this seen in a fish's gills before," Wegner said in a statement. "This is a cool innovation by these animals that gives them a competitive edge. The concept of counter-current heat exchange was invented in fish long before [humans] thought of it."

To confirm that these special gills helped the opah stay toasty, the researchers tagged a number of moonfish with temperature monitors and tracked the fish as they dove. The fish spend most of their time at least 150 feet (45 m) below the ocean surface. No matter how deep they dive, however, their body temperature stays about 9 degrees Fahrenheit (5 degrees Celsius) warmer than the surrounding water. Fat deposits around the gills and muscles help insulate the fish, the researchers found.

Warm blood gives deep-sea fish a boost, according to Wegner. The opah's muscles and nervous system likely function faster than an equivalent fish with cold blood. Other deep-diving fish, such as tuna and some sharks can shunt blood to certain body parts to keep them warm during deep dives. But these fish have to swim up out of the depths frequently to prevent their organs from shutting down.

In contrast, the opah can stay deep for long periods of time.

"Nature has a way of surprising us with clever strategies where you least expect them," Wegner said in a statement. "It's hard to stay warm when you're surrounded by cold water, but the opah has figured it out."

Next, Wegner told Live Science, he and his colleagues want to study Lampris immaculatus, the opah's southern cousin. This fish, the southern opah, lives in colder waters than the northern opah, so it would be harder to keep warm, Wegner said — but even more beneficial.

Editor's Note: This story was updated to state that most fish are "ectotherms" and not "exotherms" as it was written.