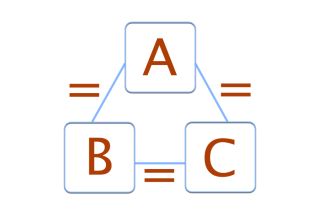 This says in essence that the three bodies are all the same temperature. James Clerk Maxwell put this perhaps more simply when he said, “All heat is of the same kind.” What is most important is that the Zeroth Law establishes that temperature is a fundamental and measurable property of matter.

When the laws of thermodynamics were originally established, there were only three. In the early 18th century, though, scientists realized that another law was needed to complete the set. However, this new law, which presented a formal definition of temperature, actually superseded the three existing laws and should rightfully be at the head of the list. This created a dilemma: the original three laws were already well known by their assigned numbers, and renumbering them would create a conflict with the existing literature and cause considerable confusion. The alternative, calling this new law the Fourth Law and putting it last on the list, was also problematic because it superseded the other three laws. One scientist, Ralph H. Fowler, came up with a third alternative that solved the dilemma: he called the new law the “Zeroth Law.” (Interestingly, science fiction writer Isaac Asimov appropriated the idea for a Zeroth Law in his 1994 novel "Robots and Empire" when he found that needed to add a new law to the Three Laws of Robotics that superseded the First Law.)

According to David McKee, a professor of physics at Missouri Southern State University, the Zeroth Law "tells us that no matter how much energy two systems have, knowing how much energy they have doesn’t let me predict which direction heat will flow if I put them in contact with each other. The Zeroth Law says that this number, which is the temperature, defines the direction of heat flow, and it does not depend directly on the amount of energy that’s involved.”

He continued, “The temperature of two systems is the only thing you need to know in order to determine which direction heat will flow between them.”

Even the simplest one-celled plants and animals respond to changes in temperature. The concepts of hot and cold, as well as “hotter than” and “colder than” are engrained in our physiology. However, our ability to communicate this concept required some standard for comparison. One of the first standards, and one that is still used to this day, uses the freezing and boiling points of water. The problem, though, was how to describe temperatures with enough precision to be useful. This required a repeatable method for measurement on an incremental scale.

The Zeroth Law of Thermodynamics defines temperature and makes thermometers possible. For a thermometer to be useful, though, it must be first calibrated. All other basic units of measure, e.g., for length, mass, time, etc., are each defined according to a precise standard. In this case, we must not only define a unit of measure, but also the beginning point of the scale.

The most notable early efforts to standardize temperature measurement were those of Daniel Gabriel Fahrenheit. In the early 18th century, Fahrenheit invented the familiar glass-tube-type thermometers using both alcohol and mercury. He also invented the Fahrenheit scale, which sets the freezing and boiling points of water as 32 degrees and 212 degrees, respectively, and is still used to this day, particularly in the United States. Most of the rest of the world uses the Celsius scale, which assigns values of 0 degrees for the freezing point of water, and 100 degrees for its boiling point at mean sea level.

All measuring scales used in science and engineering start at a value of zero. The concept of zero length, mass or time is relatively easy to grasp; however, zero temperature, or absolute zero, where there is absolutely no heat energy whatsoever, is a bit more difficult to grasp. This is because such a temperature has never been observed in nature or in the laboratory, and it is generally believed that it never will be; however, scientists have gotten quite close.

For instance, some types of thermometers use a liquid, typically alcohol or mercury, which expands or contracts with increasing or decreasing temperature. This small expansion is amplified by having a relatively large reservoir of liquid in a glass bulb connected to a long and very narrow glass tube. In this way a small change in the volume of the liquid in the bulb can cause a large change in the level of the liquid in the tube so that temperature can be determined by reading the height of the liquid against a calibrated scale.

Another type of thermometer is based on the thermal expansion of metal. Again, the problem is how to amplify a very small change in size so it can be read on a scale. One way is to use a coil with many loops so a slight change in length is multiplied by the number of loops. Another type exploits the fact that different metals expand at different rates when heated. Strips of two different metals with different coefficients of expansion can be laminated together so that the assembly will curl when it is heated. This deflection can move a needle that can be read against a scale.

Another method for measuring temperature relies on color changes in temperature-sensitive organic materials. These are typically only useful for measuring limited temperature ranges, such as indicating fever or monitoring room temperature. Another device, called a thermistor, works based on changes in the electrical resistivity of a semiconducting material due to its temperature. These devices can detect extremely small temperature changes and are used in bolometers and to monitor laboratory experiments. However, no measurement would be possible without relying on the principle described in the Zeroth Law.