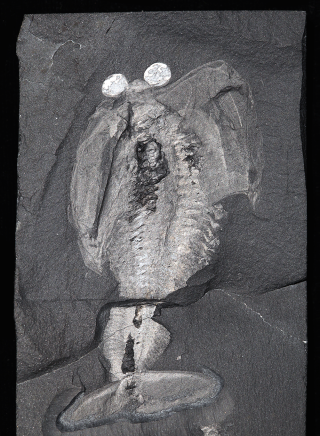 The shiny, fossilized brains of two ancient sea-monsterlike creatures are helping researchers understand how the ancestors of modern-day arthropods, such as scorpions and lobsters, evolved, as shown in a new study.

But now, fossilized brains have helped solve that mystery. An analysis of the anterior sclerites in two arthropod fossils, both more than 500 million years old, indicates that the structures were associated with the creatures' bulbous eyes. The findings provide evidence that these oval structures were associated with nerves originating in the anterior region of the brain, according to the study. [Fabulous Fossils: Gallery of Earliest Animal Organs]

"We can say, 'Ah-ha, where does anterior sclerite come from? It comes from the anterior most part of the brain — the forebrain,'" said study researcher Javier Ortega-Hernández, a research fellow in paleobiology at the University of Cambridge in the United Kingdom.

Fossilized brains are rare, but not unheard of in the fossil record. Since 2011, researchers have published roughly one study a year about incredible specimens containing fossilized neural tissue, including a 520-million-year-old arthropod found in China.

Brains can fossilize only if the conditions are just right, Ortega-Hernández told Live Science. For instance, if an animal is suddenly buried in low-oxygen conditions that are rich in certain minerals, like carbon, its neural tissue would have a chance to fossilize, Ortega-Hernández said.

In the new study, Ortega-Hernández studied two fossils that were discovered in British Columbia's Burgess Shale during the early 20th century. The fossils are approximately 500 million to 510 million years old, meaning the animals lived during the Middle Cambrian. The specimens are now housed in a collection at the Smithsonian Institution in Washington, D.C.

One of the specimens, Helmetia expansa, is a soft-bodied, trilobite-type arthropod, Ortega-Hernández said. The other, older arthropod, Odaraia alata, is shaped like a submarine, he said.

"We know from the fossil record that the earliest ancestors of arthropods are soft bodied. They look a little bit like worms with legs," Ortega-Hernández said. "But then, at some point in time, we start seeing arthropods that look a lot more familiar. They have this jointed skeleton.

It turns out that "by understanding the organization of the head region," or the anterior sclerite, "we can start to bridge how these two different body organizations are actually part of one continuum," Ortega-Hernández said.

Living arthropods don't have an anterior sclerite, which suggests the heads of arthropods have changed over time, experts said.

"This suggests that the anterior sclerite was lost or fused to the head shield in living arthropods," said David Legg, a research fellow with expertise in early arthropod evolution and phylogenetics at the Oxford University Museum of Natural History in the United Kingdom, who was not involved with the study.

"This helps use to determine to which segment the more posterior head segments belong, thereby allowing us to compare these fossil and recent arthropods and gain a better understanding of their relationships and the way that their appendages evolved," he said.

Moreover, the study helps bridge two seemingly unrelated fields, neurology and paleontology, said Greg Edgecombe, a researcher of arthropod evolution at the Natural History Museum in London, who was not involved in the study.

"Javier's paper has been among the first steps toward trying to come up with a common language between these two fields," Edgecombe told Live Science.

The study was published today (May 7) in the journal Current Biology.