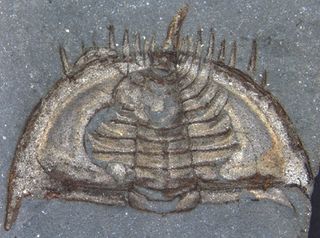 Trilobites, such as this Mummaspis muralensis, emerged during the Cambrian Period and went extinct more than 250 million years ago.
(Image: © Javier Ortega-Hernández, University of Cambridge)

About 513 million years ago, a creature curled up like a pill bug to protect itself from predators, a recently-discovered fossil suggests.

The new discovery is the oldest evidence that trilobites rolled up in self-defense so early in their evolutionary history.

"Until now, it was thought that this group was incapable of enrolling, as they lack various of the complex adaptations observed in younger trilobites," study co-author Javier Ortega-Hernández, a paleobiologist at the University of Cambridge in England, wrote in an email.

Trilobites are some of the most common, and iconic, creatures that emerged during the Cambrian Period, when the diversity of life on the planet exploded. These extinct creatures, which are related to spiders and crustaceans, died off more than 250 million years ago. [Cambrian Creatures: Images of Primitive Sea Life]

Younger examples of trilobites were known to roll up like roly-polies to avoid predators. But until now, evidence that older trilobites did the same thing was scarce.

Ortega-Hernández and his colleagues were studying a collection of hundreds of trilobite fossils that were excavated from Jasper National Park in Canada. He immediately noticed that one ancient trilobite, which belonged to a group called olenellids, seemed to have spines in front of its head.

Looking under a microscope, he realized the trilobite had actually curled its tail under its head.

By comparing the prickly creatures with later relatives that also rolled up, Ortega-Hernández concluded that the trilobite was doing the same thing.

"It turned out that this case was millions of years older than the previously known oldest occurrence, and thus became very significant for understanding the origin of this complex strategy in trilobites," he said.

Trilobites typically flexed their tails under their heads, and the spines on their tails provided a kind of armor in front of their heads that helped to ward off predators.

Because the creature's exoskeleton was well preserved and undistorted — showing a similar body posture to that of other trilobites that curled up — it's unlikely the fossil got that way due to "serendipitous squashing," Ortega-Hernández said.

Even so, the researchers are unlikely to find another rolled-up trilobite from this period due to the organism's body plan, they said.

"Because these early trilobites did not have complex locking devices that would keep the enrolled configuration even after death, the best possibility of preserving this behavior was for an enrolled trilobite to be buried rapidly by sediment," Ortega-Hernández said. "This also explains, in part, why enrollment had not been recognized for the group earlier, as the conditions required for preserving these fossils were exceptional."

The findings were detailed today (Sept. 24) in the journal Biology Letters.