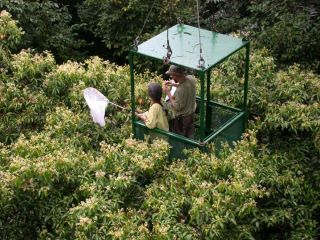 It's well-known that the world's rainforests contain an enormous variety of arthropods, the group of animals that includes insects and spiders. But a new study shows that this variety is simply mind-blowing.

The study, published today (Dec. 13) in the journal Science, estimates that a small region of tropical forest in Panama about the size of Manhattan contains 25,000 species of insects, spiders and other arthropods. That's more than four times the total of all known mammal species on Earth.

The study involved 102 researchers from 21 different countries who attacked every part of the rainforest in Panama to look for all types of arthropods. They sifted through soil, leaf litter, dug into tree bark and rotting wood and climbed into the forest's massive canopy using ropes and cranes. It's the first study to sample arthropods from every part of a tropical rainforest.

Up to 70 percent of the creatures collected in the survey belong to new, unidentified species, said Frode Ødegaard, a co-author and researcher at the Norwegian Institute for Nature Research in a teleconference.

It wasn't practical for the scientists to search the entire forest, so they did intensive sampling at a total of 12 sites and extrapolated their findings to get information about the rest of the jungle. Their results suggest that the diversity within a relatively small area can give them a good idea about diversity across a wider swathe, as long as the sample sites are well-selected and thoroughly searched. (This is very difficult, which is why it hasn't been done before, the researchers said.)

The results also showed that the diversity of arthropod life is closely correlated with the diversity of plants in the area, and this is true even for the creatures that don't eat plants, according to the study. That means diversity may be measured more easily than previously thought, said co-author Tomas Roslin from Finland's University of Helsinki. [Dazzling Photos of Dew-Covered Insects]

Arthropods, which are defined by their hard exoskeletons and segmented bodies, are vital for the functioning of the forest, so it's important to understand and preserve them, the scientists said.

Scientists spent the better part of a decade sorting through and trying to identify the 130,000 arthropods that they collected in the jungle.

"For every species of vascular plant, bird or mammal in this forest, you will find 20, 83 and 312 species of arthropods, respectively," Basset said.