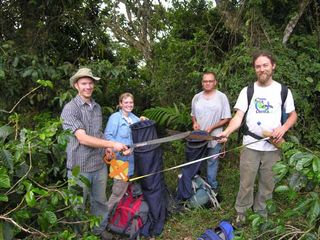 During a 2008 field expedition to Chiapas, Mexico, a litter sifting crew at Sierra Morena, prepares for work at one of the Project LLAMA (Leaf Litter Arthropods of Meso-America) study sites. From left to right are students Michael Branstetter, Brittany Broyles, Ubaldo Caballero, and Jesse McAlpine.
(Image: © John T. Longino, The Evergreen State College)

"This work will be physically demanding. You will need to carry bulky sampling supplies into rugged terrain. Some sites may be swelteringly hot, others cold and rainy. You will need to move off trails into dense forested habitats. Long hikes may be required … There will be mud and mosquitoes."

Although a hard-labor camp could be a reasonable match for that description, in reality, the harsh conditions are what await student field crews studying ants  in Central America under the guidance of biologist John Longino of Evergreen State College.

Believe it or not, there is no shortage of fresh-faced undergraduates willing to confront the daunting challenges catalogued above (which were excerpted from a recruitment ad).

But members of Longino’s work crews must be more than just willing to work; Longino warns them: "This should sound like fun to you."

Part of that "fun" comes from learning about the ecological power of ants, which according to many measures are among the most dominant organisms of tropical forests.

In addition, ants, which can each carry more than three times their own weight, act as "ecosystem engineers," moving around huge amounts of soil while excavating nests. They are also important scavengers and predators of other small invertebrates, including other ants, as demonstrated most dramatically by nomadic army ants, which are "the number one enemy of most ant species in the tropics," says Longino.

"The sight of a solid, three yard-wide carpet of ants, one million strong, slowly marching across the forest floor attacking other species of ants and insects is extraordinary," he says.

But contrary to Hollywood portrayals, army ants don't drag people down and eat them alive. Nevertheless, phalanxes of army ants do routinely invade homes in the tropics. They typically spend several hours rummaging through a dwelling, and then retreat carrying their quarry: chopped-up bits of roaches and scorpions, says Longino.

Not restricted to tropical forests, ants are key players everywhere, except in arctic and high mountain ecosystems. Evidence of the worldwide ubiquity of ants includes the fact that every language has a word for "ant," says Longino.

Longino only half-jokingly adds, "Because I can find my study subjects wherever I go, I never lack for something to do."

Where the Ant Action Is

Much of Longino’s recent work is part of the Project LLAMA, or the Leaf Litter Arthropods of Meso-America, a project supported by the National Science Foundation. LLAMA researchers search out new insect species and help identify biodiversity patterns in different regions and environments in Meso-America.

Longino’s crews kick-off each field season by poring over maps and consulting local institutions to identify promising study sites and then traveling to the sites. It’s no easy task, because the sites are usually located in remote, often mountainous terrain. Says Longino, "Central America has been inhabited by people for over 12,000 years, and so most remaining patches of forest have survived only because they are hard-to-reach."

In addition to conquering the geographic obstacles, Longino’s crews face various other threats when they explore politically unstable or bandit-patrolled regions.

A case in point: Longino and his crew counted 270 species of ants, or 60 percent of the forest’s ant species, in samples of leaf litter at one Costa Rican research station.

The researchers gather ants from the litter by creating 250 meter-long transect lines on the forest floor, collecting and sifting leaf litter along those transects, and then carrying bags of sifted litter back to a shelter.

Then, in what Longino describes as "a giant sample hanging party," the crews pour the sifted litter into 100 special mesh sacks, and then hang the sacks, which taper into collecting cups of ethanol that catch the ants and other insects that fall out.

Other collection techniques include baiting ants along hiking trails, as well as beating bushes with sticks to dislodge ants and other insects, forcing them to rain down on catchment sheets stretched out below.

Through these methods, Longino and his field crews have identified the existence and ranges of dozens of new ant species as well as many new ant behaviors.

For example, some years ago, when Longino discovered an ant species that builds nests in clay banks, he also discovered this species’ unique defense against army ants: If an army ant approaches one of their bank nests, a worker ant drags a pellet to the nest entrance, and thereby corks it shut. "These ants basically slam the door and seal themselves inside when, and only when, army ants approach their nests," says Longino.

What’s in a Name?

Longino justifies his ceaseless search for new ant species by pointing to a Chinese proverb hanging on his office door: "The beginning of wisdom is calling things by their right name." Longino hopes that the wisdom he imparts by giving ants their rightful names and improving our understanding of their ecological roles will promote their conservation. "Once something has a name, it officially exists," he says.

But recognizing that he is working during a great extinction, one that claims dozens of species daily, Longino acknowledges, "We are, in part, running a salvage operation. Some of the museum specimens we collect in Central America will probably — like Holocaust evidence — eventually provide the only physical proof of what once existed."

For more on Longino’s research, including video, click here