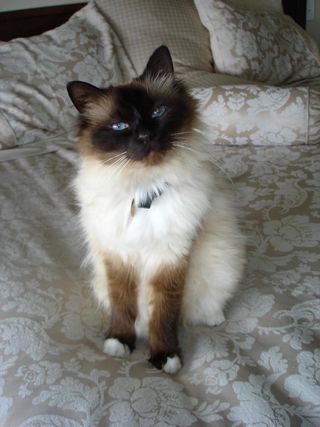 The United Kingdom-based charity International Cat Care reached out to veterinary specialists after receiving surprising complaints from cat owners: Their feline companions were apparently having seizures in response to high-pitched sounds.

A study of these cats revealed that the sound-induced seizures were more common in older cats, and the most common triggers were crinkling tinfoil, hitting a ceramic bowl with a metal spoon and tapping glass.

Mark Lowrie and Laurent Garosi, veterinary neurologists at Davies Veterinary Specialists in England, and Robert Harvey, a molecular neuroscientist and geneticist at the University College London School of Pharmacy, decided to survey cat owners about the phenomenon, which has been dubbed "Tom and Jerry syndrome," after the cartoon character Tom, who often responds to startling sounds with involuntary jerks. [Feline Fun: 10 Surprising Facts About Cats]

Hundreds of cat owners from around the world replied that they had noticed their cats were having seizures in response to certain types of sounds. Most owners' vets didn't know what was causing the seizures and didn't believe a sound had been the trigger.

In a study published today (April 27) in the Journal of Feline Medicine and Surgery, the researchers looked at data from 96 cats, including the type of seizure, how long it lasted and what sound appeared to trigger it. They found that some cats — like some humans — suffer from seizures caused by sound, known as "audiogenic reflex seizures." In the cats, certain sounds triggered absence (or nonconvulsive) seizures; myoclonic seizures, characterized by brief muscle jerks; or generalized tonic-clonic seizures, in which the animal loses consciousness and its body stiffens and jerks for several minutes.

Both pedigree and nonpedigree cats can have these seizures, but they were most common in Birman-breed cats. Seizures were also more common in cats ages 10 to 19, and the average age of onset was 15 years, the researchers said.

The sounds that triggered the seizures ran the gamut, including crinkling tinfoil (82 cats), a metal spoon clanking on a ceramic food bowl (79 cats), chinking or tapping glass (72 cats), crinkling paper or plastic bags (71 cats), computer keyboard or mouse sounds (61 cats), jingling coins or keys (59 cats), hammering a nail (38 cats) and the clicking of an owner's tongue (24 cats). Less commonly, cellphone ringing, Velcro peeling or a walk across a wooden floor with bare feet could trigger the kitty seizures.

Owners could sometimes prevent the seizures by avoiding these sounds, but that wasn't always possible. Louder sounds also seemed to make the seizures more intense.

The researchers have identifiedthis cat version of sound-triggered seizures as feline audiogenic reflex seizures, or FARS for short. Future work will focus on the genetic basis of the disorder and how to treat it.

The epilepsy medication levetiracetam can be an effective treatment for managing FARS, and could "completely rid" a cat of sound-induced seizures, the researchers said.

"How wonderful to be able to go back to those worried owners who came to us for help with a problem previously unrecognized by the veterinary profession with not only an explanation for their cats' behaviors, but a way to help them as well," Claire Bessant, chief executive of International Cat Care,said in a statement.