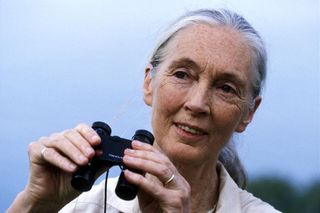 BROOKLYN, N.Y. — Jane Goodall, the British primatologist who gained worldwide fame for her studies of wild chimpanzees in East Africa, greeted a packed audience here at the Brooklyn Academy of Music last night (April 15) with a series of apelike howls.

Though the 81-year-old scientist and activist seems to have a never-ending passion for her first love, chimpanzees, she also revealed the ways in which her life and interests have evolved over the past few decades. She shared stories from the 55 years she has spent studying the social interactions of humans' closest living animal relatives at a national park in Tanzania, and the environmental conservation and advocacy she has devoted herself to for the past 30 years. She also spoke out against climate change, genetically modified foods and human destruction of the environment.

Goodall now travels more than 300 days per year, bringing her message to people around the world. [The Incredible Life of Jane Goodall (Biography)]

Goodall was born in London in 1934, and grew up in relative poverty during World War II. She dreamed of going to Africa to live with wild animals, and people laughed at her, she said. But she persevered, in part because her mother told her to "work hard and never give up," she said.

Goodall began her work at the Gombe Stream National Park in Tanzania at age 26. It was there that she made her groundbreaking observations of chimpanzee social life, including the discovery that chimps used tools. (They used blades of grass to retrieve termites from a log.) Until that point, tool use was thought to distinguish humans from all other animals. [8 Humanlike Behaviors of Primates]

Some scientists criticized Goodall for giving the chimps she observed names, such as "David Greybeard" and "Goliath," instead of assigning them numbers. But Goodall was among the first to claim the animals were capable of emotions and other humanlike behaviors.

Chimpanzee DNA differs from humans' by only about 1 percent, and they have very similar anatomy, Goodall said. Chimps also behave similarly to humans— for instance,  they kiss, and pat each other on the back. For instance, in one video clip, a chimp that's released from a crate spontaneously hugs Goodall.

At a conference in 1986, Goodall learned how the chimpanzees' habitats were being destroyed while the chimps were being hunted for bushmeat or being used in medical research.

"I went to that conference as a scientist … and left as an activist," Goodall said. Since then, "I haven't been more than three weeks consecutively in any one place," she said.

Goodall spoke about how humans are changing the planet through environmental destruction, pollution and climate change, citing the dangers tropical forests and the world's oceans face as humanity continues to burn fossil fuels and release greenhouse gases.

"I feel ashamed of my species," Goodall said. How is it possible that humans — who are supposedly so much smarter than other animals — are destroying our only home?" she asked.

But the situation may not be hopeless, Goodall said. She founded the global youth program Roots & Shoots in 1991 to empower young people to find solutions to challenges in their communities. The program now has more than 10,000 chapters in more than 100 countries.

Yet despite her conservation efforts and extensive contributions to the understanding of chimpanzees, Goodall's work has not always been without controversy.

Goodall was accused of plagiarism when her latest book, "Seeds of Hope: Wisdom and Wonder from the World of Plants" (Grand Central Publishing, 2013), was revealed to contain passages borrowed, without attribution, from Wikipedia and other sources, The Washington Post reported in 2013.

Goodall has admitted she was "not methodical enough" in her note-taking. The book was removed from shelves, and a corrected and annotated version was recently reissued.

Goodall didn't mention the plagiarism claims in her talk this week, but she was outspoken about another hotly debated issue: genetically modified (GM) foods. These are foods made from organisms whose DNA has been changed through genetic engineering, resulting in foods with more desirable traits, such as increased resistance to plant viruses or insects.

Goodall said genetically modifying a plant is "not good science." She claimed that the U.S. Food and Drug Administration scientists found that GM foods are not safe but suppressed the information, citing a book by public interest attorney Steven Druker called "Altered Genes, Twisted Truth: How the Venture to Genetically Engineer Our Food Has Subverted Science, Corrupted Government, and Systematically Deceived the Public" (Clear River Press, 2015).

However, there is broad consensus among scientists that GM foods are no more harmful than non-GM foods.

The World Health Organization notes that the safety of GM foods should be assessed on a case-by-case basis but that "GM foods currently available on the international market have passed safety assessments and are not likely to present risks for human health."