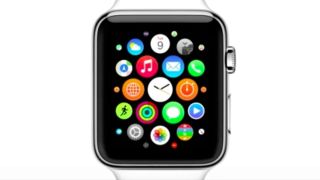 The face of the new Apple Watch, made of highly polished sapphire.
(Image: © Apple livestream, screengrab)

More than 1 million Apple Watches were pre-ordered last week, on the first day the device went on sale, according to a firm that tracks consumer spending.

Based on receipt data, an estimated 957,000 people in the United States ordered an average of 1.3 watches each on Friday (April 10), spending about $503.83 per device, Slice Intelligence reported.

What is it about the Apple Watch that makes people want the gadget so badly? [Best Fitness Tracker Bands]

There are some likely explanations for why people are crazy about the Apple Watch, which is scheduled to be released on April 24. The conventional view is that it's merely a cool new gadget, said Markus Giesler, a marketing professor at York University in Canada. But the real answer is more likely sociological, he said.

Most technology companies sell attribute-oriented benefits, such as functionality or convenience, Giesler said. By contrast, Apple sells emotion and identity. "When you buy an Apple Watch, you're not just buying this watch — you're also buying the interface into this matrix Apple has created" — a world that consists of other Apple products, such as the iPhone, iPod, MacBook and iPad, he said.

Yet, the Apple Watch isn't the first smartwatch or fitness tracker on the market. Similarly, the iPod wasn't the first portable MP3 player, but Apple was the first "to make it really easy to use and publicize it," said Scott Thorne, a marketing professor at Southeast Missouri State University. "Same thing with the Apple Watch," he said.

People also see the Apple Watch as a way to make their lives more productive and manageable, Giesler said. "Wearable technologies permeate the boundary between where the consumer ends and technology begins," he told Live Science.

A device like the Apple Watch could help people accomplish goals such as staying healthy, organizing their lives or communicating more easily with others, Giesler said.

"That's why technology like the Apple Watch comes in handy, for people to have this hope that 'this technology's going to make my life so much better,'" he said.

The smartwatch comes in three versions: the Apple Watch (starting at $549), the Watch Sport (starting at $349) and the Watch Edition (which retails for $10,000 to $17,000). Within each version, the prices vary based on the size of the case, the color of the band and, in the case of the Watch Edition, whether the case is 18-karat gold. [Apple Watch Hands-On: Smartwatch to Beat But Pricey]

But who exactly is buying these devices?

Gadget consumers typically fall into one of five categories: innovator, early adopter, early majority, late majority and laggard, Thorne said. "Most Apple fans tend to be in the early-adopter category," he said. In other words, these are the people who start using a technology as soon as it becomes (publically) available.

The watch requires an iPhone 5 or later model, so "you're probably not going to get anybody who's not already an Apple devotee running out to buy this product," Thorne told Live Science.

And the consumer base is likely much broader than just gadget geeks, Giesler said. The watch could appeal to anyone who looks at him or herself as an "ongoing project," in terms of fitness, nutrition, learning, career advancement and dating. As for the expensive Apple Watch Edition, these luxury devices will appeal to the rich and famous. The company is buying into the super-rich, "winner-takes-all" philosophy, he said.

But Giesler said he also sees a more sinister side to this gadget-mania. The Apple Watch seems to bring the promise of advancement, he said, "but once we get deeper, we realize that the technology consumes us as much as we consume the technology."

Apple's smartwatch also contains a camera and audio-recording capabilities, which come with their own dangers, he said. "Imagine how this technology will create new ways of bullying," Giesler said. For example, people could use it to record others in embarrassing situations.

And then there's the fact that you become reachable at all times, via a buzz on your wrist. The technology is no longer just part of an iPhone, Giesler said — "it's part of your body."

Thorne, however, takes a less ominous view. "You're doing the same thing with your phone, anyway," he said, adding that the majority of people with smartphones have them handy 24 hours a day. Now with the Apple Watch, "it's a little more convenient for you," he said.