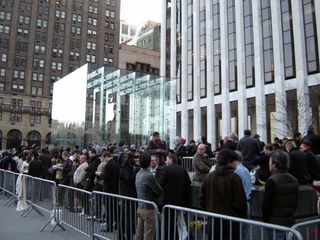 The line for iPads at Apple's flagship Manhattan store on the first day the product was released, Saturday April 3.
(Image: © Denise Chow)

When Apple released its iPad, people lined up for hours to get their hands on the latest shiny techno-gadget stamped with the Apple logo.

While there likely wasn't reason to worry iPads would go out of style, or worse, become unavailable, and those die-hard consumers didn't urgently need the tablet for an essential task that same day, still the lines persisted — as they often do when Apple comes out with something new.

The seemingly odd behavior makes sense to market researchers and psychologists who weigh in on the reasons for Apple's cult-like following, and why members feel such affection for these products.

The unadulterated loyalty often invovles brand-centric fan groups, which scientists refer to as brand communities. These groups, which have formed around Apple, Harley-Davidson and even Hello Kitty, seem to rise up largely without the aid of sly marketing campaigns and instead by grassroots movements with their own rituals and traditions. Some even say the Apple community has the makings of a cult, with fanaticism that comes close to religious furor.

These groups can form out of necessity, the desire to be part of a community, and a shared sense that members understand something that, well, not everybody else gets.

In addition, Apple fans always have something new to keep their interest, an important component in fueling any fanaticism, researchers say. And, as is the case with fans of any brand, objects can become more than the sum of their parts — they can represent a lifestyle and more.

"I think people have values that they're pursuing, they have core goals in their life, and it's different for different people, but Apple has done a good job of becoming symbolically part of one type of lifestyle, or one type of concept," said Lynn Kahle, a professor of marketing at the University of Oregon who studies consumer psychology. "The brand becomes more than just a set of attributes to get you somewhere, it's a core part of who you are."

A key component of any brand community is what researchers call "consciousness of kind," which really means a sense of "we-ness." Today, this element is driven home in the Mac community by the "I'm a PC, I'm a Mac" ad campaign that the company started running in 2006. But the bond between Mac users stretches back decades.

"I remember speaking to early Mac fans, folks who had adopted the platform back in the 80s, and they would tell me things like: 'At that time, it was clear, IBM people were one way — wore suits and voted for Reagan. Mac people were another way — wore jeans and didn't vote for Reagan,'" said Albert M. Muniz, Jr., a professor of marketing at DePaul University in Chicago, who has studied the Apple brand community.

Brand communities also involve rituals and traditions, or some type of shared culture. Harley riders have their group rides; Apple users have store openings or a new product release. As was evident with the iPad, loyalists chose to camp out despite the fact that, if they simply wanted the product, they could have ordered it online.

Finally, members feel an obligation to each other, and help each other out — like a Harley rider who stops on the side of the road to help another Harley rider, Muniz said.

"There's probably a belief that 'This person is like me, at some level they get it,'" Muniz said. With Apple users, "there might be an assumption that there are shared values on a whole range of things, but certainly on computing," he said.

Why do these groups form?

Strong brand followings don't tend to form at the snap of a marketer's fingers. In fact, it's the other way around.

"To date, the strongest examples of brand community I’ve encountered have been grass roots in nature, meaning, they have formed independent of the marketer," Muniz said.

In other words, there's often no telling what brand will strike a chord with people — these groups tend to have a life of their own. For example, some other companies that have tried to rally a cult following, like Saturn cars, were not as successful, said Russell Belk, a marketing professor at York University in Ontario, Canada.

One reason groups like the Apple community form is purely out of necessity. Macs have always been a minority computer compared with PCs, and if users have a problem with their device, they often find themselves turning to other community members for help, making the bonds between users all the more strong.

Then, there's the feeling that you're part of something special, which ties into the sense of "we-ness." For Apple users, there might be the feeling that, by going with the PC-alternative, they're heading against the mainstream. It's the idea that "We’re the people marching to a different drum, if there are fewer of us, that just proves that we understand something that not everyone else can get," Muniz said.

Scott Thorne, a marketing professor at Southeast Missouri State University, has also seen this type of exclusiveness in many fan communities, some of which use jargon as a way to refer to outsiders. "It's kind of a way to feel superior — 'We know something you don't, we're aware how cool this product is, or how good this singer is, or how cool this technology is, we know something that other people are not aware of,'" Thorne said.

Brand communities might also serve as a substitute for real, location-based communities, which recent research suggests are declining.

Within these communities, all members seem to have shared characteristics that denote them as fans.

Thorne and his colleagues have identified four: They have a personal interested in the topic or product; they do things to show that they're fans (like wearing a T-shirt); they feel the need to associate with others that share their interests; and they feel the need to find out more about the object of their fanaticism.

Such fanaticism, defined as excessive devotion or enthusiasm, can have components of addiction or obsession. But research has also shown it doesn't usually cause harm to the consumer or to others.

Not all fanatics are created equal, and Thorne has found there are generally four flavors of fandom:

"At all three of [the first] levels, your family and society may view you as eccentric, but you're not viewed as harmful or dangerous," Thorne said.

Generally, if there's nothing new to continue one's interest in a "brand," most fans will go back to the casual level.

However, Apple fans never want for such stimulation.

"That's one of the reasons Apple has such a devoted fandom, is because there's always talk about what's the next product Apple's going to come out with," Thorne said.

Is Apple a cult?

Some market researchers have gone so far as to dub Apple fans a "brand cult," a group with some cult-like attributes.

Here's why: Some fans have retold and romanticized Apple's history, giving a "legend" quality to the company and its founders. In 2005, Belk and his colleges found evidence for several myths within the Apple community, including a "creation myth" involving the creation of one of the first computers in Apple founder and CEO Steve Jobs's garage, a"heroic myth" surrounding the founders, and a "satanic component" involving the company's rivals, portraying them almost like the Antichrist.

"I think that if ever there is a brand cult, Apple deserves it, they come close to religious fanaticism on the part of enthusiastic followers," Belk said.

He points to some Apple enthusiasts who went out and bought iPads despite complaining early on that the iPad didn't offer much new, saying it was essentially a big iPod touch.

"That sort of loyalty and devotion would suggest that there's something more than an objective appraisal going on, and it's the same sort of faith and loyalty that we see in religions oftentimes," he said.

However, some feel "cult" is too strong a label to throw around when discussing brand communities, since it conjures thoughts of conflict surrounding other cult groups, such as religious cults. "That's kind of heavy baggage, it's an emotionally charged word," Muniz said.

Whether or not Apple fans are cult-like, there is no doubt that a strong sense of devotion to the brand is there. At the core of the devotion could be "a sense of self." The brand taps into what's truly important to people — it's about more than just the technological bells and whistles, it's a lifestyle, experts say.

"Apple I think has done a good job of having its brandimage connect to the core values and core lifestyle aspects of people," said Kahle, of the University of Oregon.

He points to the famous "1984" Macintosh Super Bowl ad, which alluded to George Orwell's book by the same name. In the ad, people were mindlessly watching a screen, meant to symbolize Big Brother, or conformity. A woman comes in and throws a hammer at the screen, blowing it up.

"The implication is, if you don't want a world like '1984,' you should identify with Apple," Kahle said. "Apple created an image as being a brand that's associated with independence and freedom, that the kind of tyranny of technology that's too complicated for people to use, that's something Apple was against. And Apple would create freedom or independence for you through technology, as opposed to making you a slave to technology."

"I would really consider people who use it [as] open-minded to technology, and liberal and everything," said Florian Brunbauer, an Apple user who designs and sells iPhone and iPad apps, and who stood in line the day the iPad was released. "I think it's a way to express that too."

All that said, Apple fans aren't just crazed over nothing. The company has at times been a technology innovator, said, Kahle, popularizing new concepts, like the idea of a computer mouse. And products often come with a sleek, different design that users find appealing.

Also, many of the products integrate with each other — you download iTunes on your iMac to put music on your iPod, for instance.

"That's the only way to guarantee the best experience I think," Brunbauer said. "Everything you're using comes from the same company, and that really helps. The whole process all works together, and it's very efficient in a way that you cannot achieve at all with Windows."

And since Apple allows third party developers to design applications for its products, such as the iPhone, users with a little programming know-how can jump right in and broaden the product's toolkit beyond what's provided by the company.

And fans find the products to be user-friendly, a plus with any kind of technology.

"You don't really have to learn how to use a Mac," Brunbauer said. "You just start it, and it all makes sense."