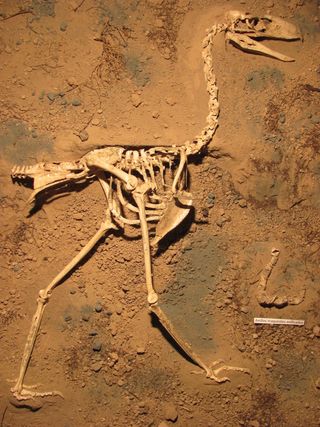 About 3.5 million years ago, carnivorous birds with hooked beaks standing 10 feet (3 meters) tall roamed parts of South America in search of prey. Now, researchers have found a nearly complete skeleton of a new species of these so-called terror birds, and are learning surprising details about their hearing and anatomy.

Researchers found the fossil in 2010 on a beach in Mar del Plata, a city on the eastern coast of Argentina. To their delight, the fossil is the most complete skeleton of a terror bird ever found, with more than 90 percent of its bones preserved, said the study's lead researcher, Federico Degrange, an assistant researcher of vertebrate paleontology at the Centro de Investigaciones en Ciencias de la Tierra and the Universidad Nacional de Córdoba in Argentina.

The scientists named the new species Llallawavis scagliai: "Llallawa" because it means "magnificent" in Quechua, a language native to the people of the central Andes, and "avis," which means "bird" in Latin. The species name honors the famed Argentine naturalist Galileo Juan Scaglia (1915-1989). [Images: 25 Amazing Ancient Beasts]

Given its extraordinary condition, the fossil has helped researchers study the terror bird's anatomy in detail. The specimen is the first known fossilized terror bird with a complete trachea and complete palate (the roof of the mouth). It even includes the intricate bones of the creature's ears, eye sockets, brain box and skull, providing scientists with an unprecedented look at the flightless bird's sensory capabilities.

"That actually tells us quite a bit about what the animals do, simply because low-frequency sounds tend to propagate across the environment with little change in volume," said Lawrence Witmer, a professor of anatomy at Ohio University  who has worked with Degrange before, but was not involved in the new study.

"Low-frequency sounds are great for long-[distance] communication, or if you're a predator, for sensing the movements of prey animals," Witmer told Live Science.

This skill puts L. scagliai in good company. Other animals that can or could hear low-frequency sounds include Tyrannosaurus rex, crocodiles, elephants and rhinos, Witmer said.

The researchers also looked at the bird's skull, and found that it was more rigid than in other birds. This could have been to the bird's advantage, the scientists said, since a rigid skull could have helped the terror bird slam prey with its large beak.

"Terror birds didn't have a strong bite force, but they were capable of killing prey just by striking up and down with the beak," Degrange said.

The researchers plan to study the terror bird's eye bones, brain case and skull in the coming years, with hopes of learning more about the animal's vision and other sensory capabilities, the scientists said.

The findings were published today (April 9) in the Journal of Vertebrate Paleontology.