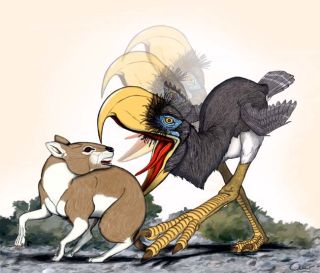 The extinct terror bird Andalgalornis brings its powerful beak down in a hatchet-like jab to attack its prey, a peculiar cat-sized herbivorous mammal called Hemihegetotherium some 6 million years ago.
(Image: © Illustration by Marcos Cenizo, courtesy of the Museo de La Plata.)

Instead of wading into the fray like a feathered Joe Frazier, terror birds may have been more surgical with their strikes like Muhammad Ali.

Terror birds were giant flightless carnivores that may have stood up to 10 feet tall (3 meters) and were armed with massive, fearsome skulls. Scientifically known as phorusrhacids, some 18 known species of these predators evolved about 60 million years ago in South America, confined to what once was an island continent until the last few million years.

Feeding on a diversity of strange, now-extinct mammals and competing with the likes of saber-tooth cats and marsupials, terror birds became top predators wherever they roamed. At least one gigantic terror bird, Titanis, eventually invaded North America about 2 million to 3 million years ago, but the animals disappeared from Earth shortly after.

Competition with new mammalian predators once the land bridge between North and South America opened up might have played a role in their extinction, but the number of terror bird species "was few and decreasing before these mammals came to this continent," said researcher Federico Degrange, a paleontologist at the Museo de La Plata/CONICET in Argentina. The competition terror birds faced from new mammals might have been the final blow, "but certainly wasn't the cause that started their gradual extinction," he added.

Since these now-extinct giants have no close analogs among modern-day birds, their life habits have been shrouded in mystery. Now, a multinational team of scientists has performed the most sophisticated study to date to reconstruct how terror birds killed, using X-ray scans and advanced engineering methods.

"We need to figure out the ecological role that these amazing birds played if we really want to understand how the unusual ecosystems of South America evolved over the past 60 million years," Degrange said.

"We're trying to understand the history of life on our planet, and understanding the biology of terror birds and how they might have interacted with animals in North America when the land bridge opened up between it and South America could help [us] understand how they shaped the predators we have today," added researcher Lawrence Witmer, an anatomist at the Ohio University College of Osteopathic Medicine.

The scientists investigated a terror bird called Andalgalornis, which lived in northwestern Argentina about 6 million years ago. It was a mid-sized terror bird, standing about 4.5 feet tall (1.4 meters) and weighing some 90 pounds (40 kg). Like all terror birds, its skull was enormous relative to its body (spanning 14.5 inches, or 37 centimeters, in length), with a deep narrow bill armed with a powerful, hawk-like hook.

Witmer ran a complete skull of Andalgalornis through an X-ray CT scanner, giving the team a glimpse into the inner architecture of the skull. The scans revealed that Andalgalorniswas unlike other birds, because it had evolved a highly rigid skull.

"Birds generally have skulls with lots of mobility between the bones, which allows them to have light but strong skulls," Witmer said. "We found that Andalgalornis had turned these mobile joints into rigid beams. This guy had a strong skull, particularly in the fore-aft [front-to-back] direction, despite having a curiously hollowbeak."

From these X-rays, biomechanist and paleontologist Stephen Wroe at the University of New South Wales in Sydney, Australia, assembled sophisticated 3-D engineering models of the terror bird. They also developed models of two living species for comparison — an eagle, as well as the terrorbird's closest living relative, a South American bird known as the seriema.

Computer simulations using these models compared their mechanics as the virtual birds bit straight down, as in a killing bite; pulled back with their necks, as in dismembering prey; and shook their skulls from side to side, as one does when thrashing smaller animals or dealing with larger struggling prey.

When they looked at how such behaviors stressed the skulls of these birds, "relative to the other birds considered in the study, the terror bird was well-adapted to drive the beak in and pull back with that wickedly re-curved tip of the beak," Wroe said. "But when shaking its head from side to side, its skull lights up like a Christmas tree. It really does not handle that kind of stress well at all."

To see how strong the terror bird's bite might have been, the researchers worked with zookeepers at the La Plata Zoo to get a seriema and an eagle to chomp down on their bite meter.

"Combining all this information, we discovered that the bite force of Andalgalornis was a little lower than we expected and weaker than the bite of many carnivorous mammals of about the same size," Degrange said. "Andalgalornis may have compensated for this weaker bite by using its powerful neck muscles to drive its strong skull into prey like an axe."

Altogether, these findings suggest Andalgalornis was no slugger like feathered Joe Frazier. Its skull, though strong vertically, was too weak from side to side, and the hollow beak was in danger of catastrophic fracture if the bird grappled too vigorously with large struggling prey.

Instead, the researchers found that if Andalgalornis tackled large prey, it needed an elegant style more like Muhammad Ali, using a repeated attack-and-retreat strategy, landing well-targeted, hatchet-like jabs. Once killed, the prey would have been ripped into bite-sized morsels by the powerful neck pulling the head straight back or, if possible, swallowed whole.

"Our team is just beginning our studies of terror birds," Witmer told LiveScience. "We're also looking at what is going on inside the skull, to get insights into their brains and sensory systems. One thing we're finding is that their brain structure suggests they had all the tools to be active pursuit predators. Sometimes others have thought they might have been scavengers, like giant vultures, but what we're seeing suggests they could have been fairly adept and agile."

The scientists detailed their findings online Aug. 18 in the journal PLoS ONE.