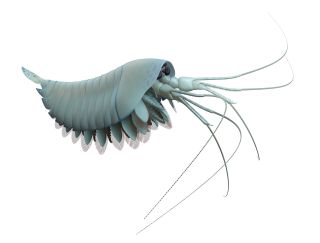 A newly discovered Cambrian predator with a wicked set of arms under its four-eyed face reveals that early arthropods were experimentalists when it came to using their limbs.

The marine creature, now called Yawunik kootenayi, lived 508 million years ago during the Cambrian Period, when the major animal groups and complex ecosystems first appeared in the fossil record. Its fossils are about the size and shape of an empanada (6 inches, or 15 centimeters, long).

It is the first new species reported from a stunning fossil find in Marble Canyon in British Columbia's Kootenay National Park. The Marble Canyon fossil beds, located in 2012, rival the iconic Burgess Shale for their diversity of soft-bodied fossils and exquisite preservation, scientists said. [See Images of the Four-Eyed Predator with Dual-Purpose Pinchers]

Yawunik is one of the most abundant species at the Marble Canyon site, and so, as a predator, likely held a key position in the food chain, said lead study author Cédric Aria, a graduate student in paleontology at the University of Toronto in Canada.

"We actually found it on the second day [in 2012]," Aria said. "It was one of the first really amazing discoveries."

The animal was named Yawunik kootenayi after the Ktunaxa people who have long inhabited the Kootenay area where the Marble Canyon locality was found. Yawu'nik is a central figure in the Ktunaxa creation story.

The new species was described today (March 27) in the journal Palaeontology.

Yawunik belongs to a group of animals called the leanchoiliid arthropods. Arthropods are now one of the most diverse and successful phylums on Earth, making up about 80 percent of Earth's species. The family tree includes scorpions, spiders, butterflies, ants, lobsters, shrimp and horseshoe crabs.

However, scientists don't agree on how and when the arthropod's distinctive body plans first evolved. Arthropods have a hard exoskeleton and a body with multiple segments. And modern arthropod legs are highly specialized; each leg does just one thing, and does it well, whether the job is eating, breathing, sensing or even copulating.

But Yawunik's front limbs were different from its modern cousins. Though they look rather dainty, the predator's long frontal appendages were dual-purpose weapons for hunting and grabbing prey.

Each frontal limb had three long claws, two of which sported long rows of teeth to capture food. Long, whiplike flagella extended from the tips of the claws. Aria thinks these flagella were sensory organs that could detect a potential dinner nearby. Yawunik could also sweep its arms backward and forward, spreading them out during an attack and then retracting them under its body when swimming, he said.

"This dual function is very, very special, because it does not appear in modern forms." Aria said. "If you take insects as an example, they have a very constrained body plan. But the constraints were not the same in Yawunik."

Yawunik's closest modern relatives may be the chelicerates (a group that includes spiders, horseshoe crabs and scorpions) — its claws are similar to spider mouthparts — but Aria said this ancient animal likely represents a stem group. A stem group is a primitive group that split from the direct ancestors of today's species.

Some 200,000 fossils have come out of the Burgess Shale since it was discovered in 1909, and the Marble Canyon quarry could hold even more discoveries than the Burgess Shale. Though the two quarries are only 25 miles (40 kilometers) from each other and perhaps 100,000 years apart in time, the species found so far have been quite different. Some animals from Marble Canyon resemble creatures from older fossil sites in China and Australia, rather than species at the Burgess Shale quarry.

"This material is not only so well-preserved but it is so old that we are really tackling immense questions about the origins of modern ecosystems and modern animal groups," Aria said.

The fossils are a mix of original organic material and minerals that replaced parts of the anatomy of Yawunik. The exact location of Marble Canyon is being kept secret to prevent people from taking fossils. The Royal Ontario Museum is building a new display to feature the discoveries.