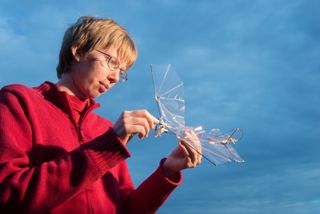 A drone that mimics the way birds fold and flap their wings could improve the design of future unmanned autonomous vehicles, and could even help the machines withstand midair collisions.

Most winged animals have a wrist joint that enables the tips of their wings to fold in, allowing the animals to tuck their wings when navigating in and around tight spaces. This also helps prevent injuries from accidental collisions with branches or other animals' wings, because it lessens the force of the impact as the wing bends inwards.

Now, researchers at Stanford University have designed a 3D-printed hinge inspired by this wrist joint. The scientists incorporated the synthetic joint into the carbon fiber skeleton of a drone with flapping wings that are covered in a membrane-type film inspired by bats. [Biomimicry: 7 Clever Technologies Inspired by Nature]

When struck with a steel rod — to simulate the wing hitting a branch during flight — the researchers found that the tip of the wing absorbed the impact by folding inward. The wing also recovered quickly and unfolded back to its full span within one beat, thanks to centrifugal forces (those that draw a rotating body away from the center of rotation) induced by the flapping motion.

"That was very exciting because it means robotic wings can adjust to incoming obstacles passively without the need for sensors or motors," said David Lentink, an assistant professor of mechanical engineering at Stanford, and one of the authors of the study published online today (March 26) in the journal Bioinspiration and Biomimetics.

The U.S. Office of Naval Research funded the research, as part of a multi-institution project to investigate how winged drones could be used to carry out missions in environments that are currently too difficult for most unmanned aerial vehicles (UAVs) to navigate, such as dense woodland.

The new solution could greatly reduce the need to design complex vision and control systems, by making the drones themselves more robust against navigation errors. The mechanism is also lighter than more mechanized solutions. In fact, adding the wrist-type joint to the robotic wing causes only a 3 percent increase in the total weight of the drone.

"You can't achieve everything birds do with current technology, so you have to condense it," Lentink told Live Science. "But we are very excited by this very simple step to achieve a very elegant solution to what seems to be a very complex problem."

Originally, the aim of the project was to mimic birds' ability to tuck their wings in when navigating between obstacles, and the researchers initially planned to use a type of motor to achieve this. [5 Surprising Ways Drones Could Be Used in the Future]

But, being a fan of Origami — the Japanese art of paper folding — graduate student Amanda Stowers began playing around with designs involving the passive wrist joint and a folding wing membrane. When she set the wing flapping she discovered that the forces generated were enough to unfold the wings automatically.

"Amanda also found out that if you push against the wing, it folds back and folds out again automatically," Lentink said. "We thought, 'Oh, wow,' because we didn't really expect it to work that nicely. I told her to go back to the lab and hit it as hard as she could and see what happens."

During testing, the drone, which was based on a design that Lentink helped develop while at Delft University of Technology in the Netherlands, was bolted to a table in a stationary position. Stowers then used a steel rod to strike the wing with both low-impact and high-impact velocities and at different flapping frequencies.

In all cases, the wing withstood the impact and unfolded again within a beat, suffering no discernible damage.

"Regardless of scale, whether the robot is very tiny or very big, it can always unfold within a wing beat," Lentink said. "If you go to a small scale where the wings flap much faster, they still recover within one wing beat. I challenge someone to come up with a mechatronic solution that can do it as quickly."

Christophe De Wagter, a researcher at the lab Lentink worked in at Delft, pointed out that flapping wings are already more collision-resistant than rotors, since flapping wings can push themselves away from obstacles.   But, he added the Stanford pair’s innovation was "an interesting development" that could bring flapping drones "one step closer to useful intelligent, autonomous and collision-proof reconnaissance flight in cluttered environments."

The Stanford researchers are now working on a drone that can take advantage of this ability to recover from collisions while in flight.

Editor's Note: This story was updated to include comments from Christophe De Wagter.