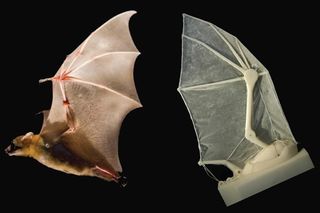 Researcher Joseph Bahlman, a graduate student at Brown University, developed the robotic bat wing depicted in this video to help scientists better understand the workings of bat flight. "Bats are just really amazing, spectacular flyers," says Bahlman, a National Science Foundation graduate research fellow. "Their wings are extremely dynamic, so much more dynamic than birds or insects. If you look at the wings of a bat, they're just like our hands, they have all these joints that let their wings adapt into lots of different shapes, giving them a tremendous range of aerodynamic forces and maneuverabilities. They fly much better than anything we've engineered. I would love to figure out how that works and then duplicate it."

Bahlman's research, conducted in the labs of Brown professors and bat flight experts Kenneth Breuer and Sharon Swartz, could offer insights that aid the design of small aircraft, among other applications. The work has received funding from the U.S. Air Force Office of Scientific Research and NSF.

Early studies with the robotic flapper, described in a paper published in February in Bioinspiration and Biomimetics, showed that when bats fold their wings in flight, they are in effect reducing drag. With the down stroke of a wing during flight, the body moves up, but the subsequent upstroke can counter that force. Wing folding addresses that problem, making flight more efficient.

Brown University's "ro-bat" mimics the shape and motion of the wing of the lesser dog-faced fruit bat, a species found in abundance in South and Southeast Asia.

The Night Life: Why We Need Bats All the Time--Not Just on Halloween