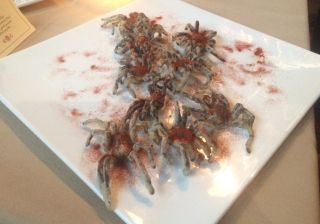 NEW YORK — Self-styled "Bug Chef" David George Gordon is in the midst of a busy week.

"Logistically, it's like planning D-Day," Gordon said. "I need 300 spiders." [7 Insects You'll Be Eating in the Future]

To cater the infamous cocktail hour at the 111th Explorers Club Annual Dinner at the American Museum of Natural History, Gordon has a $15,000 budget for the insects and other arthropods alone.

In years past, the black-tie banquet promised some exotic dishes that one would be hard-pressed to find anywhere else in New York. Just last year, one could look forward to sampling python, ostrich and goat testicles at the annual dinner. In 1907, moose marrow soup was on the menu. In 1951, the Club supposedly served morsels of a 250,000-year-old woolly mammoth. (A team of scientists recently found a grayed piece of these alleged mammoth leftovers preserved in alcohol in a museum archive; the researchers are investigating the sample's DNA to find out whether or not it's really meat from the extinct beast.)

Exotic foods expert Gene Rurka had reigned over the menu since 1998, but has passed the spatula to Gordon. And now, for the first time in the event's history, the cocktail hour will feature only bugs.

Gordon debuted some of this year's dishes here at the Explorers Club headquarters in Manhattan Wednesday night. He had spent about three hours that day making 40 tempura-battered, deep-fried tarantulas.

"I cut off the abdomens because they're just a fluid-filled sac, and if I put that into a fryer it would blow up," Gordon said. "I also singed off all the body hairs because they're woolly … I think that would be a stomach irritant."

And with those comforting words, he snapped off one of the paprika-sprinkled legs, showed off the white meat inside and encouraged me to take a bite. It was chewy, but not terrible, proving that anything, even a tarantula, can be deep-fried into submission.

Gordon, who wrote an "Eat-a-Bug" cookbook (Ten Speed Press, 2013) for adventurous and environmentally conscious home chefs, also served grasshopper kebobs, featuring insects that had been wild-harvested in Texas and glazed with teriyaki sauce. He made Cambodian cricket rumaki with large crickets (large enough that he recommended eating them in two bites) wrapped in bacon and dabbed with Sriracha sauce. As a treat for New Yorkers, Gordon prepared cockroach canapés with oven-baked roaches resting on goat cheese-filled endive leaves.

"They're not dirty," Gordon said. "Cockroaches, if you watch them, they groom themselves constantly. Really, they're like little house cats."

Entomophagy, the practice of eating insects, is something Western diners might have to get used to, as harvesting traditional livestock becomes less and less environmentally viable. In 2013, the United Nations' Food and Agriculture Organization (FAO) issued a 200-plus-page report lauding the great potential of protein-rich, energy-efficient insects to feed the world's exploding population.

For the Explorers Club, the bug-heavy menu marks an attempt to move away from the gimmicky aspects of exotic foods and toward a message of sustainability.

"You have to look at the history of exploration," said the president of the Explorers Club, Alan Nichols, an attorney and expert on sacred mountains who has biked the entire Silk Road and once ran for Congress against Nancy Pelosi.

"In the old days, the conservationists were hunters," Nichols said. "To show the world that we're eating lion is kind of disgusting nowadays."

It's now considered in much better taste to feast on crickets, which are 12 times more efficient at converting feed to meat than cattle.

Eating bugs is hardly a new idea, especially outside of the Western world. That FAO report estimated that about 2 billion people already eat insects as a part of their traditional diets.

"We're not showing the world. The world's already doing it," Nichols said.