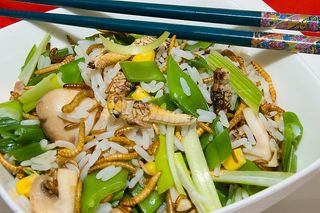 Although many Westerners may react to the idea of bug-eating with disgust, insects make up a part of the traditional diets of about 2 billion people.
(Image: © Hans Smid / bugsinthepicture.com)

NEW YORK — The problem is familiar: How to feed a growing world population. Now, a few people have offered a solution that may sound strange, at least to Western ears: Eat insects.

Now, the United Nations' Food and Agriculture Organization has weighed in favor of entomophagy, the practice of eating insects. In a 200-plus-page report issued in May, the FAO provides the first comprehensive assessment of insects' current and potential uses food for humans and livestock.

"It is widely accepted that by 2050 the world will host 9 billion people. To accommodate this number, current food production will need to almost double," reads the report, titled "Edible Insects: Future Prospects for Food and Feed Security." "We need to find new ways of growing food." [Crowded Planet: 7 (Billion) Population Milestones]

Entomophagy has picked up momentum over the years, Louis Sorkin, an entomologist at the American Museum of Natural History in New York City, and a proponent of bug eating told an audience on Wednesday (June 26) night here at the New York Academy of Sciences.

The FAO report, as well as books published over the past 20 years featuring appealing insect recipes and photos, have been a part of the greater acceptance of bug-eating, Sorkin said. "You have to get people to, I guess, swallow it here in the Western part of the world," he told LiveScience.

Although many Westerners may react to the idea of bug-eating with disgust, insects make up a part of the traditional diets of about 2 billion people, the report estimates. These include the larvae of the palm weevil, a type of beetle, in a number of tropical regions; mopane worms in southern Africa; yellow jacket wasp larvae in Japan; and grasshoppers known as chapulines in Oaxaca, Mexico, to name a few.

Beetles account for the most commonly eaten group of insects.

"I happen to like more the immature beetles, the grubs. They're softer," Sorkin said. "They don't have the exoskeleton and they are more flavorful, but to each his own."

Insects offer a clear environmental benefit, because they can convert their own food to body mass more efficiently than traditional livestock, because, unlike chickens, pigs and cows, insects are not warm-blooded, Sorkin said. As a result, they do not have to expend energy to keep themselves warm and can use it to grow instead.

Among other benefits, insects take up little space, can be raised on waste, and research indicates they emit fewer greenhouse gases than conventional livestock, according to the report.

They can be nutritious, with high fat, protein, vitamin, fiber and mineral content, although the nutritional value varies among species, the report says.

But for Westerners, entomophagy may require disguising dinner.

"I think most people here probably don't like to eat insects, because they look like insects. But if you cook the insects, dry the insects and grind them into a flour, more people would consume it," Sorkin said.

One company, Utah-based Chapul, has taken this approach and sells energy bars made of cricket flour.

Humans aren't the only ones who could stand to eat more insects. Research is exploring using insect protein to feed farmed fish and poultry, the report says.