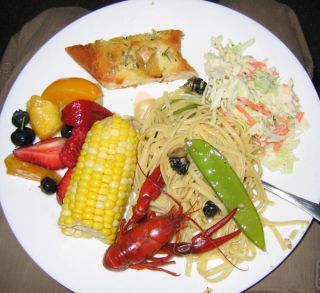 A fettuccine meal featuring the invasive Chinese mystery snail, with invasive Rusty crayfish on the side.
(Image: © Ashley Baldridge)

The first recipe posted on Invasivore.org was a simple one: Fettuccine coated in butter, garlic and dotted by chewy morsels of Chinese mystery snail. It inaugurated a grand goal: Staunch the spread of invasive species using knives, forks and some creativity in the kitchen.

Matt Barnes, one of the site's three founders and a graduate student at the University of Notre Dame, described the snails (with shells) as the size of a golf ball. Once boiled and removed from their shells, they have a rubbery texture and a, well, mysterious flavor — "not like chicken, not like beef, not like fish,"  Barnes said. [Image Gallery: Invasive Species]

Sheina Sim, another founder and a Notre Dame graduate student, helped out.

"Imagine if you dehydrate an octopus and cut it up really small and put it in butter," Sim said.

This culinary plan is two-pronged: It encourages hungry humans to eat up the invasives, though it's not likely we'll munch fast enough to control most of them. And, more importantly in the eyes of the Invasivores, it raises awareness of their spread and the toll they can take on an environment. [Invasivore.org]

Chinese mystery snails were first introduced into North America from Asia in the late 19th century, by way of Asian food markets in San Francisco. They can carry disease, their shells can clog water intake pipes and they are believed to compete with native snails, although their effects on other species and habitats aren't well understood yet.

A self-described snail enthusiast, Barnes has done some preliminary research with these snails. The recipe originates with his adviser, David Lodge, and Barnes first tasted it during the annual invasive species dinner, at which the researchers investigate the deliciousness of their study organisms.

Barnes and the third site founder, Andy Deines, work with invasives as part of their doctoral research, meanwhile, Sim, also a doctoral student, studies the genetics of speciation, or the formation of new species. They tossed around the idea of a cookbook, but that seemed too intimidating, and they settled on a blog, Deines told LiveScience.

A metaphor for war

The U.S. government — through an executive order that established the National Invasive Species Council — defines invasives as species introduced by human activity into new ecosystems where they have the potential to cause economic harm, environmental harm or harm to human health.

Globally, the International Union for Conservation of Nature list of worst offenders includes species like crazy ants, which after establishing themselves on Christmas Island in the Indian Ocean, killed 3 million native red land crabs in 18 months. Caulerpa seaweed, apparently an aquarium cast off, smothers naturally occurring habitats in the Mediterranean. Feral pigs, descended from domestic ones, dig up vegetation, spread weeds, destroy crops and eat smaller creatures, like sea turtles, birds and reptiles. The list goes on.

While some species — like the feral pig — warrant it, the term "invasive" is too liberally applied, according to Walter Tschinkel, a professor at Florida State University and the author of a book about a particularly unpopular species that arrived in the southern U.S. via ship, "The Fire Ants" (Harvard University/Belknap Press, 2006). He points out that "invasive" is a metaphor for war.

"Without having done actual surveys, it seems to me that most of what people call invasives are things they don't like for one reason or another," Tschinkel said. "But when you look at the distribution of so-called invasive species, the large majority are not in natural ecosystems, they are in highly disturbed ecosystems that have been modified by humans. And of course, humans are the ultimate invasive species and we have a whole bunch of guests that come along with us."

Invasive species make up as much as 80 percent of the wild plants "Wildman" Steve Brill introduces to foragers on his tours in parks and other relatively natural places in and around New York City.

"I have been into eating invasive species for decades; I don't think it has a great impact on them. We just don't eat fast enough," said Brill, who has led foraging tours for almost 30 years. There is an indirect benefit, however. "Still it gets people outdoors and gets them more knowledgeable about what is going on with the local ecosystems and the importance of protecting habitats."

Eating campaigns have also targeted individual species. Spiny, venomous lionfish, a likely aquarium escapee, have been found along the Atlantic coast of the southeastern United States and in waters near Bermuda and Long Island in New York. It's not yet clear how these predators will fit into local food chains, but The Lionfish Cookbook (REEF Environmental Education Foundation, 2010) offers them a place in ours.

A campaign to promote nutria, an orange-toothed, rat-tailed, marsh-destroying, semiaquatic rodent introduced for its fur, as food in Louisiana enjoyed at best marginal success before it ended in 2003.

"It took off as a novelty, a lot of people liked it, but it never did gain supermarket status," said Edmond Mouton, a Louisiana Department of Wildlife and Fisheries biologist who manages the current Coastwide Nutria Control Program. He blames a number of factors, including the abundance of good food in southern Louisiana, as well as the animal's rather unappetizing appearance. Mouton does, however, credit the project with leading to the current incentive program, which pays trappers for nutria tails alone.

While eating invasive species could provide a means to control populations, there is a potential downside, said Lori Williams, executive director of the National Invasive Species Council.

If you create a big enough market, you create an incentive for people to introduce the species into new parts of the country and new bodies of water, she said. "If it's not carefully controlled, then you could be making the problem worse."

Numerous invasions have been driven by our desire for a particular food. The snakehead, an air-breathing fish from China, may have been released to establish local populations, and there is no question that domesticated pigs have begot the ferocious and destructive feral ones. And the prospect of worsening the situation has lead policymakers to forbid the commercial harvest of certain invasive species, such as Chinese mitten crabs.

The Invasivores have pondered this. "The risk of backfire seems greatest if consumer demand is decoupled from the knowledge that the species is harmful and to my knowledge this hasn't happened," Deines wrote in an email. "This is one reason our main goal with Invasivore.org is invasive species awareness; awareness is the only intervention that can prevent invasions from even occurring."

And attention-grabbing recipes — think ingredients like "mystery snail" — mean more awareness, as well as some challenges.

"I am really interested in seeing what we can do with something like rock snot," Barnes said, referring to the invasive algae also known as didymo.

"I think you could freeze it and turn it into a Popsicle," Sim said. "Maybe you could use it as a salad dressing… I don't see why not."