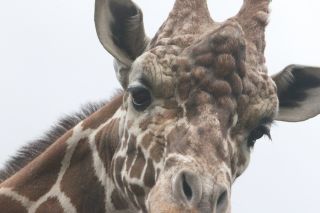 Animals should have eyelashes about a third the width of the eye, a new study found. Giraffes generally follow this rule, with eye openings about 1.5 inches across and lashes a half inch long.
(Image: © David Hu)

Cosmeticians probably won't agree, but scientists say eyelashes have an optimal length: a third of the width of the eye.

This ratio helps keep the eyes wet, according to a new study that attempts to answer the question: What are eyelashes for anyway?

"They've been hypothesized to act as sun shades, dust catchers and blink-reflex triggers," said David Hu, a mechanical engineer at the Georgia Institute of Technology in Atlanta. "But there's been no really systematic study of what their true benefits are." [The 12 Weirdest Animal Discoveries]

Rather than poke around the eyes of live snow leopards and wild boars, Hu and his colleagues went to see the lashes on animal pelts in the basement of the American Museum of Natural History in New York. They took measurements of the eye openings and lashes of a diverse group of 22 mammals, ranging from the Amur hedgehog, whose beady little eyes are just a fraction of a centimeter in diameter, to giraffes, whose eyes are about 1.5 inches (4 cm) across. (For comparison, the human eye opening is about three quarters of an inch, or 20 millimeters.)

The researchers discovered that lashes get predictably longer as the eyes get bigger. On average, animals' eyelashes were a third of the width of their eye opening.

"We found that there's a pretty good trend for how lashes change with eye width," Hu told Live Science. "That's quite striking because in the mammal-hair literature, you don't see many trends. Hair is usually a function of habitat, activity, things like that."

Hu and colleagues suspected eyelash length might have something to do with channeling airflow, and they devised an experiment to find out. In the lab, the researchers made mock human eyes out of small petri dishes fitted with fake eyelashes of different lengths and a bit of water, meant to mimic the thin tear film on the surface of the eye. The researchers tested how quickly water would dry up from the dishes in a low-speed wind tunnel. They found that the lashes of optimal length were the best for preventing evaporation.

Eyelashes create a "speed bump" that diverts airflow away from the surface of the eye, Hu said, so having no lashes would leave the eyes vulnerable to evaporation and incoming particles like bacteria that can cause infections. You might expect this speed bump to get more effective as it gets bigger, Hu said, but eyelashes that are too long might actually funnel airflow into the eye, causing more evaporation and drying the eyes.

At this point you might be wondering: Are you telling me I should toss my fake eyelashes? Well, maybe not. But perhaps you should take your beauty cues from the camel.

"The more dense you could make your eyelashes, the better it would be," Hu said.

Camels have two rows of dense eyelashes — likely an extra defense against the dry, sand-laden desert air. Eyelashes of high density (or low "porosity" as the researchers say) are better at blocking airflow from the surface of the eye, the experiments showed.

This benefit might even hold true for humans with unnaturally long lashes. In their paper, Hu and colleagues wrote that "wearing curved false eyelashes of low porosity can potentially provide extra protection to the eye and reduce dry eye."

The study, led by Guillermo Amador, a graduate student in Hu's lab, was published today (Feb. 24) in the Journal of the Royal Society Interface. (Last year, Hu's lab found another peculiar rule in the animal kingdom: most mammals take 21 seconds to pee.)