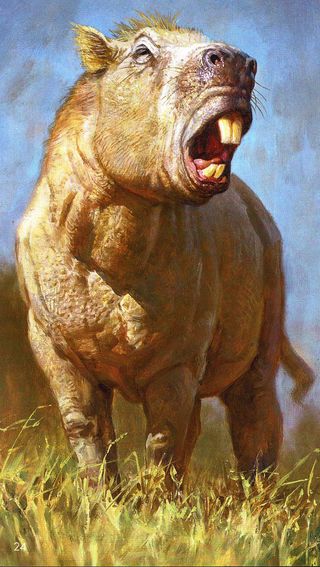 An illustration of the giant rodent Josephoartigasia monesi. The overgrown rodent was bigger than a buffalo and had giant teeth that it used like elephant tusks.
(Image: © James Gurney)

Talk about a rodent of unusual size.

The biggest rodent to ever stalk the Earth lived about 3 million years ago in what is now South America — and it used its large front teeth the way today's elephants use their tusks.

The bull-size creature likely used its incisors to root around in the ground for food, possibly even fighting off predators with the sturdy teeth, according to a new study.

An amateur paleontologist first unearthed the skull of an extinct rodent, Josephoartigasia monesi, from a boulder on a beach in Uruguay. The stunningly well-preserved skull was about 20 inches (51 centimeters) long, suggesting the rodent could grow to 2,200 pounds (1,000 kilograms), the researchers calculated.

For comparison, the next largest rodent ever discovered, Phoberomys, may have weighed up to 1,500 pounds (680 kg). And the modern world's biggest rodent, the capybara, can weigh a modest 130 pounds (60 kg).  [Rumor or Reality: The Creatures of Cryptozoology]

Past studies had suggested the beasts had fairly weak chewing muscles and small grinding teeth. That suggested the animals dined on soft vegetation and fruit. Yet most rodents have tremendously strong bites, and the researchers suspected this massive rodent was no exception.

To understand more about how J. monesi used its teeth, Philip Cox, an archaeologist at Hull York Medical School in England, and his colleagues analyzed the likely orientation and size of the animals' muscles along the jaw.

They estimated the rodent could produce a bite force of about 312 pounds force (1,389 N) — equivalent to that of a tiger. Even more impressive, the force at the animals' incisors, or third molars, could reach about three times that amount, at 936 pounds force (4,165 N).

Because chomping down on veggies wouldn't require that level of force, the authors suspected the incisors had another purpose.

"We concluded that Josephoartigasia must have used its incisors for activities other than biting, such as digging in the ground for food, or defending itself from predators. This is very similar to how a modern-day elephant uses its tusks," Cox said in a statement.

The findings were published Feb. 4 in the Journal of Anatomy.