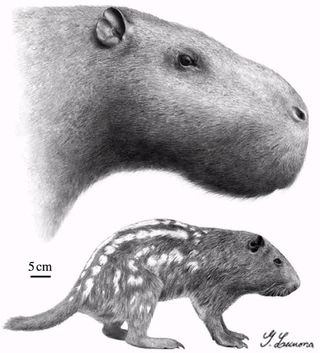 The giant rodent Josephoartigasia monesi, which might have weighed more than a ton when alive, compared with its distant living relative, the pakarana (Dinomys branickii).
(Image: © Gustavo Lecuona)

The largest rodent that ever lived weighed a ton or two, scientists revealed today.

The extinct mouse-like critter was larger than a bull.

Until this discovery, the largest known fossil rodent was Phoberomys, which might have weighed between 900 and 1,500 pounds when alive. In comparison, the largest rodent alive today — the capybara (Hydrochoerus hydrochaeris) of South America — weighs about 130 pounds.

"Imagine a mouse with the body weight of two race horses — it's very impressive indeed," researcher Ernesto Blanco, a biomechanicist at the Uruguayan Institute of Physics in Montevideo, told LiveScience.

The skull of the extinct rodent suggests it had weak chewing muscles, and its grinding teeth are very small. This suggests it might have eaten soft vegetation and perhaps fruit. Nearby fossils suggest it dwelled in forests in a river delta or near an estuary.

Although the rodent's chewing muscles may not have been strong, the researchers hope to reconstruct its head muscles to see if it had a strong bite. "All rodents have powerful bites, but this giant one's probably was terrific!" Blanco said.

The scientists will detail their findings online Jan. 16 in the journal Proceedings of the Royal Society B.