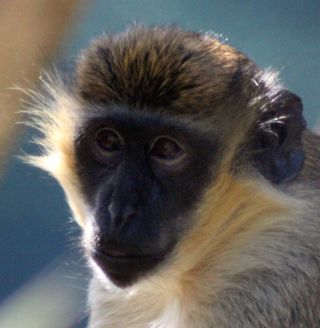 Guenon monkeys look strikingly similar within each species, but a computer program is able to tell them apart based on facial patterns, such as eyebrow patches and nose spots.
(Image: © W. Allen)

Colorful monkeys called guenons sport moustaches, nose spots and ear tufts that make it easy to distinguish between different species of guenons. But to the average passers-by, monkeys of the same species might look strikingly similar.

But in a new study, researchers uploaded 541 photographs of 110 monkeys of 12 different guenon species. The scientists found that a computer algorithm could correctly identify these monkeys by their faces, as well as distinguish among species.

Scientists might be able to use algorithms like this one to study which factors are important in evolution, the researchers said. For instance, the algorithms could look at which aspects of a monkey's face are important to its evolutionary success. [Photos: Adorable and Amazing Guenon Monkey Faces]

The researchers also found that the algorithm they used in the study could not determine the monkeys' ages or sex from their faces, which suggests that guenon faces have not evolved to convey this information, the researchers said. "If communicating sex was a key aim of guenon faces, males and females should look different from their facial appearance, but for most species they don't," said James Higham, an assistant professor of anthropology at New York University (NYU) and one of authors of the study.

The computer program that the researchers developed analyzed aspects of the monkey's faces according to the "eigenface" technique, which helps computers recognize human faces. The program works on the principal that variations among faces can be described numerically, with each individual face scored based on how it relates to a set of general faces ("eigenfaces"), Higham told Live Science.

"We sought to test a computer's ability to do something close to what a guenon viewing other guenons' faces would do," study author William Allen, who completed the work while at NYU, but who is now a postdoctoral researcher at the University of Hull in the United Kingdom, said in a statement. "We did so by taking measurements of visual attributes from photographs of guenon faces and asking a computer to try and separate different groups as accurately as possible on the basis of these measurements."

Facial differences may provide vital clues to determining identity for guenon monkeys when they mate, the researchers said. Many of the species live near each other in the rain forest, and their diverse faces likely keep them from interbreeding, according to a study published in June 2014 in the journal Nature Communications.

If they mated across species, the guenons' offspring might be infertile or have impaired health, the researchers told Live Science in a 2014 interview about their earlier research.

"The [new] study further supports the hypothesis that guenon facial diversity is related to species recognition and the need to avoid hybridization," Higham said.

Yet the face differences go even further, and may be critical for maintaining social relationships between individuals in a stable social group, he said. The new study's technique may help other scientists research animal appearance in relation to evolution, Higham added.

The study was published in the Feb. 4 online edition of the journal Proceedings of the Royal Society B.